Chicago Shakespeare Theatre’s “As You Like It?” We liked it 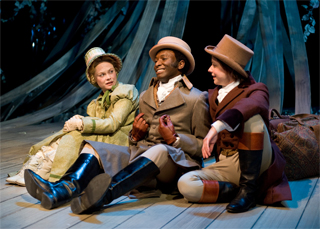 The thought of reading and studying Shakespeare strikes fear in the heart of many a high school student (and their parents.) But we forget what a funny guy Shakespeare was. His comedies are filled with fantasy, word play and physical humor and in the right actors’ hands, his plays feel very much like familiar sitcoms.

This is the case with Chicago Shakespeare Theater’s rich, marvelously acted production of “As You Like It.”

Set in both the Royal Court and the Forest of Arden, “As You Like It” follows the dynamic Rosalind as she discovers the power of first love. It’s a tale of loyalty, friendship and, of course, mistaken identity when she masquerades as a young man tutoring her true love Orlando on the rules of courtship.There are love stories aplenty as Shakespeare fills the play with romantic odes, lusty relationships and one-sided affairs that all manage to work out in the end.

The performances are what really make this production sing. Kate Fry is simply amazing as Rosalind. Her energy, spirit and fast-paced delivery keep the audience rooting for her throughout. The scenes between her and her cousin Celia, played with charm and wit by Chaon Cross, are the best parts of the show.Teenage girls will easily identify with the intimacy and steadfast loyalty of their friendship.

Phillip James Brannon is also brilliant as the clownish Touchstone. His hip, and very cool interpretation of the character really speaks to a modern sensibility without departing from Shakespeare’s text.

“As You Like It” contains some of Shakespeare’s most famous passages, including the “All the world’s a stage” speech. Because the cast handles his language so nimbly, even audience members unfamiliar with the text and story will understand the author’s message, his humor and his brilliance.

The show runs about 2 hours and 40 minutes with one intermission. If you think that’s a little too much Shakespeare for you and your children, consider CST’s “Short Shakespeare!” program which will present a 75-minute abridged version of “Macbeth” every Saturday morning at 11 a.m., January 22

A national expert offers tips on how help your kids disconnect from screens.
Read more
Guides

Easy No-Carve Pumpkin Ideas to Make with Your Kids

Katie Adams -
No knives (or mess!) needed for this fun craft.
Read more