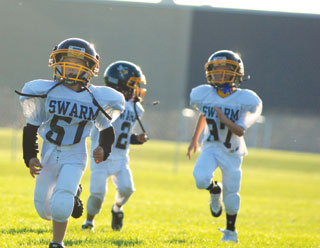 In football, as in life, Chicago Bears Safety Danieal Manning says, there are ups and downs, good days and bad days.

What matters is how you play the game.

“You just have to stay dedicated and know the ultimate goal and get everyone in your family or on your team on the right path and the right page,” he says.

“If the kid can go out like a player and execute the parents’ game plan, usually the things will turn out all right, just like in a football game,” he says.

It doesn’t matter whether your youngsters are in sports, drama club, debate team or math bowl. Parents and coaches call the signals that shape the life lessons kids take away from the activities.

There’s plenty kids can learn from competitive activities, says Gloria Balague, a sports psychologist at University of Illinois at Chicago.

Here’s the page of the playbook to mark: They can discover constructive ways of looking at life and affirmative ways of understanding themselves. Or they can take in destructive messages that foster disrespect and over-emphasize winning at all costs.

Sure, football has a lot of teaching moments for our kids. But Chicago Parent blogger Meredith Sinclair shares what football can teach parents.

When my feather-weighted son signed up for tackle football in the fourth grade I heard myself utter a muted mixture of “oh yeah!” and “oh dear lord” all at once. Read more&gt;>

The key is to make sure the kids are getting the right lessons from their activities-be it football, gymnastics, ballet or beauty pageants-and not the wrong ones, Balague says.

If mom’s first question when Johnny walks through the door is “Did you win?” or “Did you make a touchdown?” the lesson is that winning and being the star is the most important thing.

If the question is “Did you play hard?” or “Did you support your teammates?” the lesson is that trying your best and being a loyal team member is what counts.

If parents berate a coach or complain because their player sat on the bench, the message is “I should always get my way whether I deserve it or not.”

If the coach is committed to calling out the best in kids, competitive sports are a positive training field for life. If the coach goes all boot camp drill sergeant on them, it can foul a young person’s confidence and self-esteem, Balague says.

“Kids can learn a lot of good through playing competitive sports like football,” she says. “It’s up to the coach and parents to follow the rules and keep things in the right perspective.”

That’s what Joliet Catholic Academy Coach Dan Sharp hopes he accomplishes with his players-and his own son. In a reverse play, Sharp was the receiver of the lesson his son tossed his way.

Over the years, Sharp watched his only son grow up on the gridiron. Since he was a little boy, Danny had shaped himself for a future in football. As a senior, Danny was the team captain and college recruiters had him in their sights. But a ripped ligament in his knee left him watching his teammates take the state championship from the bench.

“I saw Danny’s ability to be strong for his teammates from the bench, to overcome the grief and overwhelming disappointment he was feeling,” says Sharp, head football coach and athletic director at JCA, the state’s biggest title winner with 13 division championships.

“He showed me you can’t dwell on the bad things that happen. You have to accept what you get and move on.”

Tony Lopez introduces players as young as 5 to the gridiron through the Swarm’s Tiny Mites in Darien. It’s a way to get little tykes to focus and take direction, the coach says.

They learn how to respect adults and they get Team Work 101, he says.

“They learn that they can trust the guy next to them to do their job,” Lopez says.

Traveling and interacting with other teams from culturally diverse neighborhoods fosters tolerance and acceptance of people who are different from them, says Lopez, 44, a father of five.

Coach Aaron O’Neill coaches the Eagles, inner city seventh- and eighth-graders at the National Teachers Academy, a kindergarten through eighth-grade school on Chicago’s South Side. His approach, called Teaching Responsibly through Physical Activity, stresses taking responsibility, fostering respect for the rights and feelings of others, self-motivation, cooperation, self-direction and helping others.

Like Balague, O’Neill knows kids can intercept productive values from team sports. Or they can learn self-defeating lessons if the focus is only on winning.

When winning is all-important, it can hurt a boy’s respect for himself and others, O’Neill says.

“The idea that the other team is the enemy rather than a respected opponent can lead to divisive consequences,” he says. “Us-against-them adds one more classification that teaches people to separate themselves-gender, race, economic status, religion, sports.”

At NTA, the messages are about life on and off the field. Passing grades and turning in homework assignments are a prerequisite to being an Eagle.

Marcus Lyons, 13, was flunking everything until he became an Eagle in seventh grade. This year he’s getting B’s. He hopes to go to college and then become a Chicago Bear.

“Football is teaching me to be a young man, preparing me to go on to school,” he says.

So far, he’s on a winning team. The Eagles defeated the three-time defending champion Dodge Academy to win its first title last year.