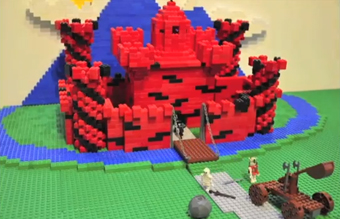 “I’m excited to see what people come up with and the story they tell with their Lego creations. We’re looking for not only that they can build but they can tell a story with the Lego brick,” Johnson says.

Although stop-motion videos are the most popular format on YouTube and SchoolTube, the contest is open to all kinds of production, Johnson says.

If kids do decide to try stop-motion, Johnson says it’s important to have a lot of patience. He created a few stop motion clips for his application to work at Legoland and remembers the hours he spent working on them.

“If something starts taking a lot of time, don’t get frustrated. The stop motion I made was three minutes long and it took me about two weeks of working on it,” Johnson says.

But technique won’t be number one on the judges’ lists.

“The biggest thing is not only to focus on how good your building looks but how good your story is … and show a new way or a new perspective of using Lego bricks,” Johnson says.

Entries will be accepted through May 17. Five finalists will be chosen by a panel including a handful of Legoland employees, including Johnson. The finalists and their families will be invited to an exclusive red carpet premiere of the center’s new Lego Legends of Chima 4D movie, where the Grand Prize winner will be announced.

Johnson says he hopes kids will enter the contest for more than just the prize.

“This is definitely something I wish was around when I was little. I’m excited to get other kids interested in film. I hope the experience will broaden them and get them excited not just about film but about Lego, and how those two different mediums for imagination can come together,” Johnson says.

To enter the contest, applicants need to complete the online entry form on Legoland Discovery Center Chicago’s Facebook page and include a link to their video. Videos should be one to three minutes long. Children must have permission from their parent or guardian to enter.