When the landlord’s wallet goes bust 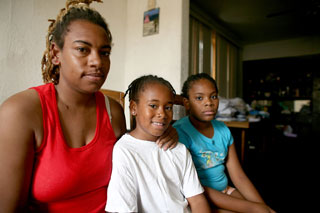 Tisha Canada didn’t want her children’s teachers to find out her family was homeless.

But when 10-year-old Antoineisha turned in stories about having no place to live, her English teachers had questions. When 6-year-old Antoineia drew pictures of a sad stick family looking for a house, the art teacher got the picture. When 9-year-old Antoine’s grades slipped from A’s and B’s to C’s and D’s, the 33-year-old mom with chronic kidney problems knew her foreclosure facade wasn’t making the grade.

Canada is among about half of Chicago’s foreclosure victims who end up with no roof over their heads without ever missing a monthly payment, according to Kathleen Clark, executive director of the Lawyers’ Committee for Better Housing in Chicago. These are renters whose building owner couldn’t make the monthly mortgage.

“It’s been terribly stressful for my kids, moving from house to house, spending four hours a day on the bus to get to school, losing their rooms,” says Canada, 33. Her three youngsters had been living in their apartment at 1836 N. Luna for nearly a year when they first met their Texas-based landlord. It wasn’t until she showed him rent receipts for every single month that he realized he wasn’t going to be able to evict them.

In hindsight, Canada saw the signs of foreclosure on her walls. First, there was that flood of letters to “unknown occupant” from a law firm in her mailbox. She didn’t open them because she thought they were meant for a previous tenant.

As winter bore down, the apartment management company stopped returning her calls about the plumbing not working and the roof falling in. Yet she treasured the steady routine she supplied her brood: homework after school, supper together, baths and bedtime.

“We felt happy with the pattern we had going on as a family,” she says.

Canada, who was recovering from a kidney transplant, wasn’t happy with her apartment manager but hoped it would all work out.

It became clear that wasn’t going to happen when the lights and heat, which were included in her rent, went dark and cold.

“When the kids would ask me what was going on, I didn’t know what to tell them. I couldn’t make any sense of it,” Canada says.

In February 2008, she called 311 for emergency help. Her kids were cold and, because of her ongoing kidney problems, she couldn’t survive without electricity. A city worker encouraged her to open one of those envelopes from the law firm.

“That’s when I found out the building was in foreclosure,” she says. “For a whole year, I’d been paying rent while the apartment management company wasn’t paying the gas and electricity.”

Canada and her kids put most of their things in storage and went to stay with her sister on Chicago’s far North Side. The three children crammed into one bedroom and their three cousins stuffed into another. Her sister took the couch so Canada, who was back on dialysis, could have her bed.

Canada resolved to keep the kids in their neighborhood schools. That meant a two-hour bus trip beginning at 6 every morning and ending around 5 every afternoon. Canada whiled away the day reading and working online at the library so she could accompany her clan both ways.

“It was a nightmare. There were some mornings, transferring from the L, I thought I was going to be too weak to make it,” she recalls.

After a few months, the trek got to be too much and they moved in with Grandma, who lives in an apartment on Pulaski, closer to school. Canada is working with the Lawyers’ Committee for Better Housing and looking for a place the family can call its own.

They need to find one soon. The gas at Grandma’s is off. Her building is now in foreclosure.