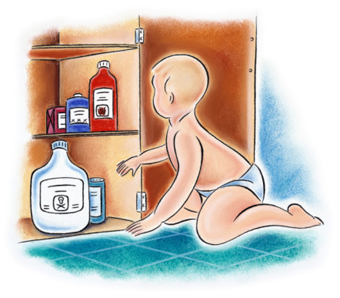 Fact: Kids put everything into their mouths. When it’s your iPhone, it’s sort of cute, but when it’s a poisonous substance, it’s serious.

And kids 5 and under accounted for more than half of all calls to U.S. poison centers in 2009, according to a new report by the American Association of Poison Control Centers.

Dr. Michael Wahl, medical director of the Illinois Poison Center, says kids’ tendency to taste-test things is a developmental trait, and one that eventually goes away, but it makes them susceptible to poisoning.

“The most dangerous time for poisoning is between 18 and 36 months,” he says. “It’s at 15 months that a child can consciously try to take a pellet out of a bottle or put it back in. Right then is the point that we start to see an increase.”

Most poisonings are not fatal – children 5 and under only accounted for 21 poison-related fatalities nationwide in 2009 – but can be scary, especially for mom and dad.

What to watch for

Most calls to poison control centers are for those seemingly innocuous items you have rolling around in your purse or stuffed under the bathroom sink – cosmetics and personal care products. These items, such as deodorant, lotion and sunblock, tend to cause gastrointestinal upset or have a laxative effect, Wahl says.

But the more dangerous substances tend to be pharmaceuticals, especially beta blockers, pain pills and anxiety drugs, household products like furniture polish and lamp oil and automobile products such as windshield wiper and radiator fluids. These types of products are most to blame for child fatalities.

The president of the AAPCC, Richard Dart, also reminds parents that while safety latches and special caps on medicine bottles are helpful, “there’s no such thing as a child-proof product.”

If you think your child has swallowed a poisonous substance, the IPC says to call poison control first, rather than going to the emergency room. Wahl estimates that 95 percent of all poisonings can be managed at home, especially when smaller doses have been ingested.

How to prevent poisonings

Tips from the IPC include:

A Day at the Poison Control Center

Ever wonder what the other end of a poison control call sounds
like? This “Day in the Life” feature on the Illinois Poison
Center’s website is a fascinating look at the business of saving
lives.

All aboard! Your train-obsessed kiddos will love these local spots in the city and suburbs.
Read more
Guides

Here's how to celebrate Rosh Hashanah and Yom Kippur with your kids.
Read more