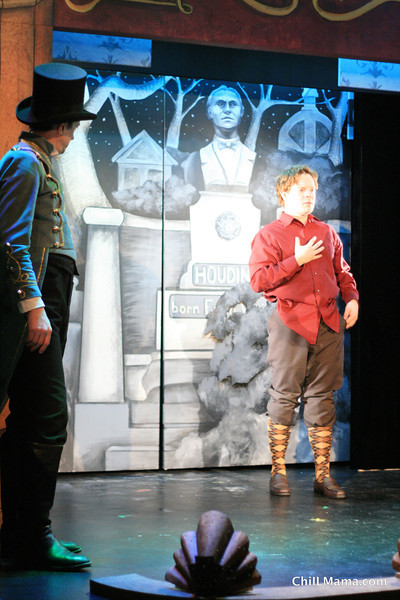 *Click here to check out our video interview with Oscar nominee, Brian Selznick, author of the original children’s stories Houdini Box, the play, and Hugo, the movie, were based on!

We caught up with Brian on the set of Chicago Children’s Theatre’s premier of Houdini Box, also based on one of Brian’s children’s books. He’s joined by Mark “Mucca Pazza” Messing, one of our favorite musical masterminds who wrote the score to Houdini Box and the recently extended Hunchback Variations, also now playing!

Get to know the man behind Scorsese’s latest masterpiece! Brian talks about first hearing about his Oscar nominations right here in Chicago and elaborates on collaborating on the film and the play based on his works. He even gets in a little set painting-just for fun!

Houdini Box at Chicago Children’s Theatre opened to rave reviews and critical acclaim. Catch this show while you can, before it performs a disappearing act worthy of the great magician himself.

Houdini Box is suitable for kids 5 and up, but all ages through adults will enjoy this magical production full of puppetry, excellent music, and a mysterious, creative storyline. Houdini Box is playing in Chicago at The Mercury Theatre through March 4th, then rematerializing in Skokie from March 14th-25th.

Brought to you by Dino & Dragon Stroll
Read more
Health

Have a shot-wary kid? Here’s how to prepare them.
Read more
At Home