Not just for grown-ups anymore, Lollapalooza finds its family-friendly side 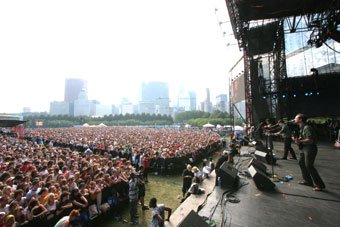 Call it punk-rock parenting, goo-goo for Gaga, or munchkins with mohawks.

All children under the age of 10 are admitted for free with a
ticket-holding adult. There is no limit to the number of kids one
can bring, but be warned: admission for multiple kids is granted at
the discretion of festival gate staff.

For those braving out the mainstages rather than the PG-rated
Kidzapalooza, you’re bound to field a few questions that, well,
you’d rather not amid the all-out insanity Lolla promises and
usually delivers. We thought we’d try to anticipate some of the
best, and point out a few teachable moments amid the madness.

For the sixth year in a row,Lollapaloozais coming to Chicago this weekend, bringing more than 100 acts and a decidedly family-friendly approach to the craziest three days of the summer.

The fest showcases music for all tastes: nostalgia withSoundgarden,Green Day and Blues Traveler; world-dominating glory from Lady Gaga; indie pop fromThe Strokes, The New Pornographers andThe National; soul power fromErykah Badu; heavy-duty guitar business by The Black Keys, andWolfmother; and a handful of newcomers for those looking for the next big thing.

Organizers strive each year to make the event a family affair – one where today’s cool parents can enjoy themselves along with their young ones – and this year is no exception.For parents who’d prefer that their kids not jam out to Cypress Hill’s “Hits from a Bong” (we can’t imagine why not) or get a glimpse of Gaga’s sensationalistic booty, the Kidzapalooza stage is perfect.

The featured acts are tailored to appeal to both kids and adults alike. No saccharine Barney or Wiggles imitators here. Instead, the stage is booked with festival organizer/Jane’s Addiction frontmanPerry Farrell, ex-Porno for Pyrosguitarist Peter DiStefano, Nineties alterna-poppersThe Verve Pipeand Ed Kowalczyk from Live, and more performing sets designed to please kids without putting their parents to sleep.

The stage also finds kids themselves strutting their musical chops.School of Rock, the local class that introduces kids to rock performance, the Chicago Youth Symphony (performing withDan ZanesofThe Del Fuegos), and more are given equal billing amongst thebig guns- a brilliant move that serves both as a spotlight on young talent and, hopefully, as an inspiration to young music fans and musicians in the audience.

Of course, it takes more than just a stage of music to keep kids’ focus. Luckily, this is covered with kid-centric activities galore: video karaoke, painting and screenprinting areas; hip hop, skateboarding and break dancing workshops; a drum area to bang out aggression; andbody paintingand hairstyling stations where kids can get temporary tattooed and mohawked.