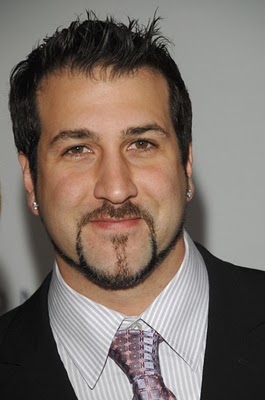 Former Dancing With The Stars runner-up and ‘NSYNCer, Joey Fatone, might have once sung “Bye Bye Bye” but the singer, actor, and father is back with a new single, new daughter, and a guest stint on a new episode of Playhouse Disney’s hit series, Imagination Movers, to air Saturday, May 22 on Disney Channel.

Fatone will play a famous baseball player, Joey Giordano, who’s faced with the impossible – deciding between his big playoff game and his son’s birthday party on the same day. In true problem-solving fashion, the Movers will help Giordano find a balance.

I had the thrill (my inner college girl was slightly giddy) of talking to talk with Fatone about finding the balance between work and play in real life, along with his perspective on the best and most unexpected parts of being a dad to two girls, Brianha, 9 and Kholey, 5 months, with wife, Kelly Baldwin who was hospitalized for blot clots in both lungs during her pregnancy.

What was it like to work with the Imagination Movers?

They were awesome. The hospitality in general was amazing. They just made me feel at home and welcome and it was a blast. I had a really good time. It’s always so interesting because with Imagination Movers, it’s always very animated. It’s over the top.

Yes, but when you’re talking you have to make sure you get the point across to the kids and everything’s much more… ‘wow!’

What do you hope your girls learn from you?

Wow. For me, it’s just to know right from wrong. Just like any parent, you want your kids to be safe and make the right choices, the right decisions.

My 9-year-old is already picking up my traits. She likes to sing. She likes to entertain. I don’t know if that’s something she wants to do as a career, but I try to help her. I don’t want to force it down her throat or anything, but if she’s interested, I want to help.

What has been the most surprising or unexpected part of being a dad?

It was crazy because after Brianha was born I was home for a couple of weeks but then I left to go record. And then I came back two or three months later and it was a totally different kid.

And this one, Kholey, I’ve been home for a lot more. And it’s just amazing. Them just developing. Just normal, general skills. To eat. I always find that kind of stuff fascinating. They watch what you do and they try to imitate it. As the muscles start developing they can start to hold stuff and point to stuff and talk and so many things.

How do you balance family time with work commitments?

I try not to be away from my family for more than two weeks. This month has been crazy with everything from DWTS to promoting Imagination Movers to having a single out to shooting a film right now… I’ve been gone for three weeks.

Khloey is still young and Brianha is still in school, so that’s good. She’ll be able to come meet up with me and travel with me a lot more. I try to stay home as much as I can. We’re like any normal family. We run around. Do errands. Hang out with our family. Go to the movies. Same old kind of thing as anybody else. I sit at the table and try to help Brianha do her homework. When I’m home, I get up and take her to school every morning. My wife takes over with Khloey so it’s a good thing to have two. It’s equal now.

What inspired you to establish the Fatone Family Foundation?

It was after ‘NSYNC split up. We used to have charitable events for children and I wanted to keep doing a charity event of some sort for the fans. With ‘NSYNC we used to donate money and some of it we never knew where exactly or what it was going to.

With the Fatone Family Foundation, literally my whole family – my sister-in-law is actually in charge of it – we do different events throughout the year to do things for different children’s charities, especially here in Orlando where I live.

We’ve done stuff for Camp Boggy Creek, which is a chapter of Paul Newman’s Hole in the Wall Camp. We raise money for Arnold Palmer Hospital in Orlando, and what we’re doing is building a music therapy lab for kids with cancer.

A lot of them love music or are heavily involved in music, so they’re always writing songs or banging on the table for beats, some of them want to play piano. So this will give them an outlet to do that. We’ll actually have a person that’s 24 hours on staff that will help the kids come up with songs, or help them play musical instruments or get on the computer to record stuff. So it’ll basically be a mini recording studio at the hospital.

Convonista says: Joey and I talked in early May of 2010, and this interview was originally released within a few weeks.

Plan ahead! We've rounded up some of the best activities and events to do with kids in Chicago and suburbs this month.
Read more
Outdoors