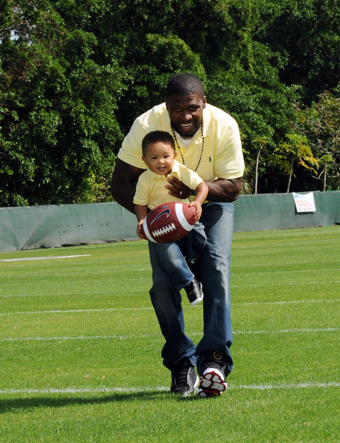 We all know the stereotypes about professional athletes: They’re not family men. They’re showboaters. They’re not good role models. The antics of players like the New York Jets’ Antonio Cromartie, who has nine children by eight different women, don’t do much to promote the idea of an NFL star as a family man.

But for every stereotype, there’s someone who sets out to bust it, and Devin Hester has been running through walls most of his five-year, record-setting career with the Chicago Bears.

So when he sat in a meeting last year with a sports marketing team to plan out his future off the field-what sponsorships he wanted to pursue, what type of work he wanted to do outside of football-he came up with an idea of his own.

He was a new father-he and his wife, Zingha, had just welcomed their first child, a son named Devin-and he wanted to be a role model for young dads. He wanted to show fans that for every Cromartie, there’s a dad like him, who changes diapers and takes their kids to Yo Gabba Gabba!

And he wanted to start with a parenting magazine in his adopted hometown of Chicago.

You’ll find the third installment of that column on page 12 of this issue. “Hangin’ with Devin” is a color commentary of Hester’s outings around town with 18-month-old Devin. But it’s other things, too: a pushback against a stereotype and a playbook of sorts for fathers everywhere to get involved in their kids’ lives.

Hester’s own parents divorced when he was a toddler. But rather than having an absent father figure, Hester says he had two: his own father, who was active in his kids’ lives before dying of cancer when Hester was a teenager, and his stepfather, who raised Hester and his brother like they were his own.

Many kids whose stories start with a broken family aren’t so lucky, something the Hesters know.

“Devin has some friends who didn’t have their fathers around, and he was able to see some of the trouble they had,” Zingha says. “He could see for himself the difference it makes to have that man in a young guy’s life.”

Growing up in a fatherless house has been linked to behavioral problems, struggles in school and run-ins with the law, says David Klow, a psychotherapist with Northwestern University’s Family Institute specializing in men’s issues.

“Fathers give us guidance, direction, stability, model a way of living in the world, and without that presence, kids are often left to look for that inspiration out in the world,” he says. “Sometimes they get lost.”

“He’s really showing what he’s about is about family, that he’s not into crazy partying, that he’s not out getting into trouble,” he says. “That’s a choice and it can be a hard choice for someone who’s that famous and who’s pulled in a variety of directions. It takes a certain strength and sense of self to say, ‘That’s not what I’m about.'”

Instead, Hester is, in his own words, a man focused on family. He and Zingha met during his final year at the University of Miami and married last summer.

“I’m a family guy, a one-lady kind of guy, and I think having strong father figures in my life … it was never going to happen that I was going to be an absent dad,” he says.

Zingha says Hester is hands-on when it comes to Devin, who goes by D.J. at home.

“He’s excited to be a dad and it shows,” she says.

‘A different kind of responsibility’

Some dads can point to a singular moment when their fatherhood hit them. No so for Hester-not when Zingha told him she was pregnant, not when he saw the ultrasound, not even when he met his son for the first time. Instead, it was over the first few weeks of his son’s life that the feeling crept in, during late night feedings or when young Devin would cry and reach out to him.

“For me, it was realizing that this is someone depending on me, actually reaching out to me, needing my help, needing love, needing me to be a father figure,” he says. “That was real.”

Not that Hester is a stranger to responsibility. When he lines up to receive a kick, he knows he carries the expectations of himself, his team and his championship-hungry city. But fatherhood is, pardon the pun, a whole different ballgame.

“It’s a different kind of responsibility,” he says. “When I’m on the field, I’m a football player and I’ve got guys who count on me to make the play. But when I leave the locker room, it’s family time. I’ve got a kid counting on me to bring groceries home and spend time with him. He doesn’t care about any of that other stuff.”

And while the uncertainty of the NFL upcoming season has Hester a little on edge these days, he’s enjoying the time off with his son. So far, the pair have hit Navy Pier, KeyLime Cove and the aquarium.

“I love Chicago, and you get to see a whole different side of it with a kid,” says Hester, who says Bears nights out don’t often include cotton candy and Ferris wheels.

If he sounds like he’s having as much fun as little Devin, that’s because he probably is. In a lot of ways, Hester is still a kid at heart. He has a young boy’s love of cars and motorcycles; he restores old cars in his free time. He was one of the first people in line to test out the new Microsoft Kinect video game system when it debuted at the Oakbrook Microsoft retail store last year.

And when he returned a punt 64 yards into the endzone at the University of Minnesota’s TCF Bank Stadium, becoming the NFL’s leader in punts returned for touchdowns, he wanted to thank the 10 guys on the field who blocked his path into history. So he bought them remote-controlled cars.

“I just like to have fun, and to me, there’s nothing better than running around with my little man,” Hester says. “He’s getting big so fast and he’s always on the move.”

And if genetics have anything to do with it-or if our cover photo shoot is an early indication-little Devin might give his father a run for his money one day.

Brought to you by Star Cinema Grill
Read more
Advice