An Indian folktale blooms through dance 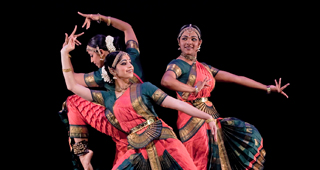 A poor peasant. A magical plant. An evil villain.

Those elements seem to fit your standard fairy tale, but this story, The Flowering Tree, is more than a Jack and the Beanstalk knock-off. The original dance performance, debuting at the Harris Theater this month, aims to introduce the Indian folktale and its deeper meaning to children of all ages.

The Flowering Tree uses Bharata Natyam, a form of traditional Indian dance, and a narrator, called the sutradhara, to tell the story of a young girl, Kumudha, who comes from a very poor family and is ostracized for being different. She appeals to the heavens and the “higher powers” give her a magical mantra to say. It turns her into a beautiful tree that gives flowers to the townspeople-but only as long as they nurture and care for it.

Throughout the tale, others, including the handsome prince who falls in love with Kumudha, take advantage of her power and treat her poorly, leading to the realization that all of nature must be regarded with respect.

“It’s a story of humanity respecting nature and nature consistently giving to humanity,” says co-artistic director Krithika Rajagopalan. “Who doesn’t want to teach their kid we’ve got to be good to the world around us?”

The story also emphasizes the importance of treating one another with respect and love.

The entire show is original, from the costumes to the score, and the dancers come from the Natya Dance Theatre in Chicago. With a running time of one hour and 20 minutes, it’s short enough to appeal even to young children.

“It’s very accessible to anybody,” says Rajagopalan, who also serves as the sutradhara. “If you’re afraid of not knowing what it’s all about, don’t be.”

She says the story is told not only by the sutradhara, but also through the athletic dancing, vibrantly colored textiles, rhythmic score and the dancers’ facial expressions.

And for those whose little ones really get into the music, Rajagopalan has one final piece of advice: “It’s best to get an aisle seat.”