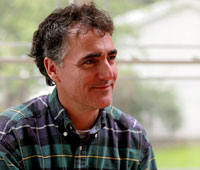 It’s Saturday at Tom and Patricia Dart’s house. It’s quiet outside on this tree-lined street in Chicago’s Beverly neighborhood, but inside it’s loud, chaotic and every bit a typical family, albeit one with five young children.

Tom Dart, 47, the Cook County sheriff, former state legislator and rising star of the Democratic Party, seems unaffected by the whirl of activity around him.

Getting to know Tom Dart

As children scamper about – including 2-year-old Alyson, who is shirtless (“I spilled,” she tells a visitor) – Dart quietly goes about wiping down the kitchen island, cleaning up stray puddles of soup and bits of crackers from the children’s lunch.

It’s precisely this bustle that led Dart to decline an opportunity to run for U.S. senator. The lure of a powerful national office wasn’t enough for him to spend time away from his family.

“It would be an incredible juggling operation,” says Dart. “I would say that 99.9 percent of the reason I didn’t run for U.S. Senate is my family. Money wasn’t going to be a question, but in the end, being in Washington for one day, let alone five days a week, simply wasn’t going to happen.”

Dart says promises that he could come home each weekend rang hollow. “You’re fooling yourself if you think you can come home and relax,” he says. “You’re going to be busy with events you have to attend. I wouldn’t be able to spend any time with my family even if I was home.”

Despite intense pressure to run, the decision came down to his children: Thomas, 8, Molly, 6, Lauren, 4, Alyson, 2, and Shannon, 3 months.

Still, Dart tries to arrange his schedule so he can be home each evening to help with supper, baths and bedtime. He also tries to take the older children to school, and get to soccer and gymnastics events.

The Darts are Catholic and firmly believe family is a priority. As she sits with her husband at the kitchen table, Patricia admits she’s glad her husband didn’t run. “I wanted to be supportive of him, but it would get ugly (if he ran). It would require a huge demand on us. He’s a hero for the moment.”

That honesty is prevalent throughout their conversation. Although 12 years younger than Dart, Patricia is an equal partner in the relationship.

With five children, Patricia runs a highly regimented household, but says it has to be in order to get anything accomplished.

“Homework has to be done right away, dinner is done by 6 p.m., baths are done by 7 and everyone is in bed by 8 p.m.,” she says. “So if homework doesn’t get done when it’s supposed to, that means the kids are up later and it can get stressful.”

There are occasions when Dart will miss an evening, but he makes sure to call. One recent instance was when the mess at Burr Oak Cemetery broke.

But just because the household routine is scheduled to the minute, no one should think there isn’t time for fun.

As Dart wipes down the island, he and Patricia rummage around and find a container of homemade chocolate chip cookies that are put out on the kitchen counter. Like magic, the kids appear and help themselves.

Alyson, now with a clean shirt, wanders through the kitchen and into the adjoining family room, followed by Thomas, who’s bouncing a ball. He bounces it to Dart, who looks at it and bounces it back.

In the doorway, Molly looks forlornly into the kitchen, holding an American Girl doll.

“It’s her birthday,” says Dart. He walks over to Molly, kneels down and explains to her that once the guests are gone, the rest of the day will be hers and she can open the rest of her presents.

As he and Patricia sit at the kitchen table talking, Dart reminisces a bit. “My wife and I used to tutor kids in the neighborhood and we felt like we were making a difference.”

Now, with five kids of their own, they can’t do that anymore. But, Dart says, the need to help others is what led him to public office. In the legislature, he wrote Illinois’ Sexually Violent Predators Commitment Act helping thousands of children, but Dart hated the political process.

“I was fighting my own party,” he says. “I was told I could only introduce three bills a session and those had to be pre-approved.”

It angered Dart, so he left to run for state treasurer. He lost and shortly thereafter moved to the sheriff’s department, where, he says, he was in a position to help lots more people.

For instance, in October 2008, in response to the mortgage crisis, he announced his deputies would no longer conduct evictions until more safeguards were put in place to protect tenants.

It was a controversial decision. “Some people think I’ve exceeded the role of sheriff,” says Dart. “I happen to think I’ve barely scratched the surface.”

Dart views his role as father the same way. He heads to work between 5 and 6 a.m. so he can leave early to spend the evening with his family.

“I have to really plan well,” says Dart. “By starting earlier in the day, I can leave the office by 4 p.m. and still put in an 11-hour day.”

Dart stops talking as Thomas wanders by and hands him a transformer. “Look at this one,” Thomas says.

Dart looks closely at it. “It looks like a crab.”

Thomas grins, grabs the Transformer and heads back to his room.

“I live for these kids. I don’t golf, I don’t bowl, I don’t go to happy hour. Scheduling events on the weekend is verboten. Maybe four or five times a year we’ll go to a parade I have to be in, but we take the whole family and make a fun day of it.”

Patricia says that while it is frustrating at times, she also loves spending time with her kids. “I’m so happy I can sit back and laugh with them. When we spend time together, I want them to get to know each other and talk with each other.”

As the Dart children get antsy and want some attention, Dart wanders into the family room and the children (all but 3-month-old Shannon) follow.

Dart sits on the rug in the middle of the room while Thomas, Molly and Lauren jockey for spots on the L-shaped couch. Alyson makes a beeline for her dad. He scoops her up and while playing with her, Lauren starts crying.

Everything stops. Dart spies a guilty looking Thomas. When it finally comes out that Lauren had gotten pinched, Dart makes it clear that Thomas needs to sincerely apologize-or else. What the “or else” is isn’t clear to guests, but Thomas understands.

He apologizes and play time resumes. Suddenly, it’s a wrestling match on the floor and the group is joined by baby Shannon, who is up from her nap. Dart cradles the girl in his arms while the other children swarm about.

Patricia is part of the mix, smiling.