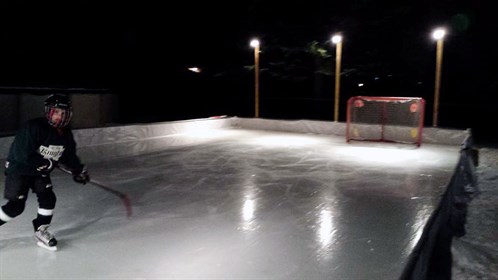 After years of my kids dabbling in ice hockey, I finally allowed my enthusiastic middle son, Jack, to join a house team. The St. Jude Knights Club reluctantly accepted Jack despite his complete inability to stop. In the meantime, I successfully made a memorable first impression at our inaugural game, bellowing out:

GET THE BALL TO HALF-ICE!

Apparently, there is no “half-ice” in hockey.

But there are certainly many devoted parents. It is a game that demands more time, financial commitment and emotional involvement than any other sport we’ve done. Nobody ever warned me that the whole family would essentially be joining a hockey team.

All was made clear this weekend. Prior to departing for a tournament at the Kalahari Resort in Wisconsin, several informal practices were held at the team mom’s house.

I was expecting a frozen puddle. Instead? I drove up to this:

And parents crazy enough to build the closest thing to a regulation rink I have ever seen.

Despite the welcome and early forgiveness of my hockey ignorance, I was still nervous about spending a weekend with people I did not know well. My husband was even more stressed. Most of Joe’s friends go back almost 30 years, so he chose to dedicate the three-hour drive to studying a laminated card with names of kids, parents and spouses.

Sadly, I had already burnt that bridge after a season where I called all the dads “Mike” and all the moms “Barb.”

Throughout our drive, I checked my phone as emails flew back and forth. There were updates on team location, jokes on appropriate swimwear, and a general sense of fun and camaraderie that made me genuinely happy to be part of such a group. 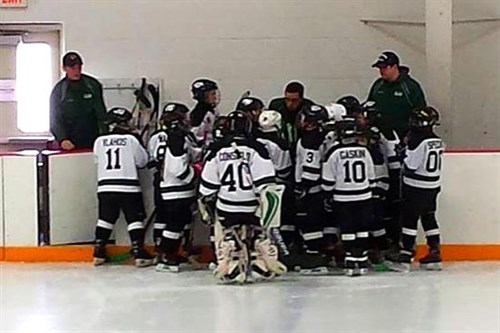 After arrival, there was some serious discourse on game strategy. The kids truly run the gamut in terms of experience and burgeoning skills. Some were born on the ice. Some have only been skating a year or two. After a brief interrogation of our players, we learned that our shouted hysterics and helpful hints (STICK DOWN! SKATE FASTER!) were never heard. The only person’s voice loud enough to carry, the ONLY one whose commands all the kids acknowledged hearing, came from a dad named “Vince.”

We immediately put Vince in charge of yelling at each of our individual kids.

Panicked at the potential loss of voice, Vince instead came up with “Jazz Hands.”

Instead of screaming ourselves hoarse, we decided to channel Al Jolson and wave our hands furiously to alert our individual children of things they needed to improve.

As did having fun. While ice hockey can be an extremely intense sport, our team took advantage of a rare weekend away where the kids could stay up late, goof around and get to know each other better.

The same could be said of their parents.

The team’s tournament record may not have been stellar. And next year, some of the players are moving on to travel teams and other clubs. Yet when these kids look back on their Jazz Hand-waving parents, awesome coaches and wonderful teammates, they will only remember victory.

I know I will.

How to Prevent Firearm Accidents in the Home

For families who choose to keep a weapon for self-defense, taking time to properly secure the weapon is non-negotiable.
Read more
Sponsored Content