Chicago family takes their story to the big screen 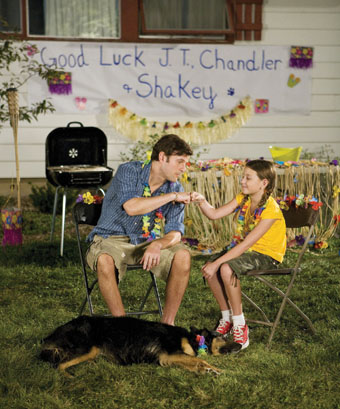 There are plenty of reasons why “I Heart Shakey” was the feel-good family flick of the summer, but not all of them are apparent to the audience.

“I Heart Shakey” is now available on DVD. For more
information, visit iheartshakey.com.

Husband/wife duo Kevin and DeAnna Cooper teamed up to write, film and produce what amounts to a 20-year project in the making-and one based on their own family.

“This is a story about love and loyalty and what you do when your family is threatening to break up,” DeAnna says.

Long before the Coopers settled in Wheaton, DeAnna and Kevin moved from New York to Beverly Hills to work in the film industry.

When Chaplain, the family mutt at the time, was not welcomed at their new place, they begrudgingly tried to find him a new home.

That didn’t work out too well. Chaplain was a difficult adoptee and eventually DeAnna thought: “He’s not giving up on us, so why are we giving up on him?”

“I Heart Shakey” follows a similar premise. A widower moves from Toledo, Ohio, to a high-rise in Chicago with his 10-year-old daughter and their mutt, Shakey, in tow.

Parents of three children-two boys, 14 and 10, and a 6-year-old daughter-the Coopers moved to Wheaton in 2005. Both are instructors at Columbia College.

Chaplain died in 2009, a year before the Coopers completed their live-action 3-D feature film.

Because the family could not live without a dog, they soon adopted Holly. For DeAnna, a family pet is an important part of a healthy family.