Can groundhogs really predict the weather? 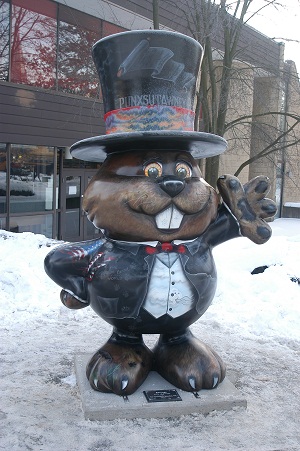 Groundhog’s Day is finally upon us, and the town of Gobbler’s Knob in Pennsylvania is booming with tens of thousands of tourists. Accordingly, the town has a days-long celebration, including an art show, breakfast with Punxsutawney Phil, and an exhibit at the Weather Discovery Center looking at the science and folklore of weather.

For a fun read, head to GroundhogDay.org for a lot of silly and serious
facts about Groundhog Day.

We learned, for instance, that:

We also learned that the history of Groundhog Day can be found
in the old Teutonic traditon of Candlemas Day. An old German
proverb on the Groundhog Day site goes:

For as the sun shines on Candlemas Day,

So far will the snow swirl until the May.

For a great laugh, you can also head to this Wolf Gnards entry on the 1993 movie Groundhog
Day, starring Bill Murray. Director Harold Ramis has estimated that
Murray’s character relives anywhere from 10 to 40 years worth of
Groundhog Days, and the intrepid Gnards statistician (and his many
commenters) dig into their own estimations.

Additionally, couples from various parts of the country descend upon the borough of Punxsutawney just northeast of Pittsburgh to get married.

So if the groundhog sees his shadow, they will have a stormy marriage?

We decided to get behind the seemingly backwards idea that if it’s a sunny day, winter will last longer and if it’s a cloudy day, spring will come soon. We talked to Tim Sullivan, the curator of behavior husbandry (and no, this does not refer to the wedding couples) at the Chicago Zoological Society, aka the Brookfield Zoo.

Sullivan does not like Groundhog Day. But he doesn’t discount the idea that we can learn things from animals, or that animals sense changes in our environment long before we do.

“Elephants can hear in the infrasonic,” says Sullivan. “They can feel vibrations through the ground that we could never sense.”

Earthquakes, volcanic eruptions, ocean storms and avalanches are examples in which – after the fact, Sullivan points out – people have noted that animals cleared out the day before. Sullivan also says that animals are sensitive to changes in barometric pressure that may indicate the early stages of a tornado.

Other animals, Sullivan says, can sense – through smell or hearing or sight – things that humans would never sense until the cataclysmic event was upon us.

In fact, Sullivan says, humans are starting to train animals to utilize their extra-sensory abilities. There are even reports, he says, of dogs being trained to inform their owners that they’re about to have an epileptic seizure up to 30 minutes before the onset.

“We’re just scratching the surface of our understanding of these things.”

But can an animal’s predict the weather? Sullivan is circumspect.

“The groundhog issue is more of a cultural thing than having anything to do with the environment.”