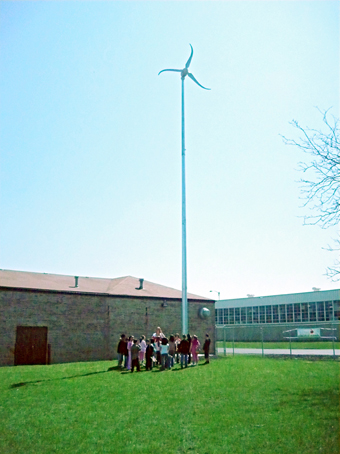 Green initiatives are nothing new at Chicago area schools, but their advancement has taken a new turn. Ecology and recycling clubs, with newspaper drives and waste-free lunches, have morphed into sophisticated Energy Ambassador programs where school gardens, solar power and wind turbines are part of everyday environmentalism.

The traditional three Rs of reading, writing and arithmetic are old school compared to the current mantra: Reduce, Reuse, Recycle. As educational access to advanced technology continues, a fourth “R”-renew-may be in order.

Thanks to grants from the Illinois Clean Energy Community Foundation, solar arrays now grace the rooftops of about 100 Chicago area schools.

Harnessing the wind’s power for electricity is the next frontier. Currently, only three Chicago metropolitan schools have this capability.

Rhodes School in west suburban River Grove was the pioneer when its 60-foot, 2.4-kilowatt turbine went active on April 9, 2009.

In 2011, as a result of the three schools’ successes, ICECF instituted a pilot Wind for Schools program.

“Since wind and solar are very complementary, it made sense to give pilot preference of wind to those schools with solar panels,” Martin says.

Tips and Tricks for Living Green

We take short showers instead of long, hot baths and we wait until we have a full large load of laundry before running the washer. The same applies for our dishwasher as well. With everyone helping out in our family, we definitely have seen a decrease in our utility bills as well as helping our environment. If everyone tries to do a little something to go greener it can definitely go a long way.

Martin says the electricity generated by wind turbines in a city environment is small when compared to the downstate turbines seen in open fields.

At Hinckley-Big Rock Middle School, the turbine can power the lighting in three science classrooms on a good day.

“The students know the electricity generated won’t make a huge difference at the schools, but they see what it can do at their house and they know it can offset 25 to 50 percent of the energy using wind or solar power,” says Matt Olson, a science teacher at Hinckley-Big Rock.

Built-in monitoring devices record energy production in action. “Students and teachers can access data online to compare wind and solar, not only at their schools but with other schools doing the same thing,” Olson says.

Curriculum opportunities abound as teachers integrate wind and solar lessons across a variety of content areas, including information technology, math and science.

Parents support the program, too.

“There are wind farms near our school, the price of energy is always in the news and parents are excited since their children are learning relevant information,” Olson says.

“It has provided tremendous classroom opportunities and as a parent, the turbine is a wonderful conversation starter,” she says. “It gets people talking at home, in the classroom and even at soccer games as it spins near the fields.”

“Why wouldn’t we have a turbine to generate electricity for the school? Why shouldn’t we recycle everything? Thinking about the earth’s future is something we should all be doing every day,” her son, Mark, says.

Lucy Latourette is a writer and mother of two who continues to remind her children to turn off the lights to conserve energy.

Have a shot-wary kid? Here’s how to prepare them.
Read more
At Home