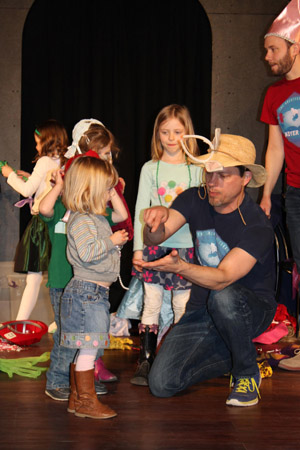 Any theatrical endeavor that begins with pre-show dressing up, board games and coffee (for the, ahem, slightly less energetic among us) is an automatic win in my book. The comedic powerhouse that is The iO Theater, formerly known as The ImprovOlympic, has a kid-friendly show that starts out just that way. Good news: It gets even better from there.

The Greatest Story Never Told is a brilliant concept targeted for ages 3-11.

The concept? Invite a bunch of kids to see an epic work of theater, only to realize the script has completely disappeared. Next, corral those children into creating and even performing the story alongside seasoned professionals. And no worries if a member of your party is a Shy Violet, as audience participation is strictly voluntary. As my 5-year-old informed me, “Watching the show is an important job, too.” The show we witnessed on a sunny Saturday concerned a royal wedding, a zoo with a few problems and even a choreographed dance break.

Speaking of audience participation, my 3-year-old was more than thrilled to offer up a character suggestion—and then literally jump at the chance to perform said character. She somehow ended up in three separate story lines of the improvised show. All parental bias aside, it was one of the best shows I’ve ever seen in my whole life.

A wholly immersive production, the entire audience feels as though they are in on the action (and in on the jokes as well, especially the clever asides for grownups).

While all of the magic is happening onstage, the “script” is being penned in real time for posterity. The post-show book, in both digital and hard copy with professional illustrations, can be purchased after each show, allowing your improviser, or quite-pivotal audience member, to relive a great afternoon of live theater. Each actor gets their very own byline, too.

If your kids need a primer for the type of comedy that made Chicago famous, this is where they should begin. And if you should ever need a fearless—and hysterical—monkey child for any reason, I can help you with that, too.