What to expect when you’re expecting: Gorilla style 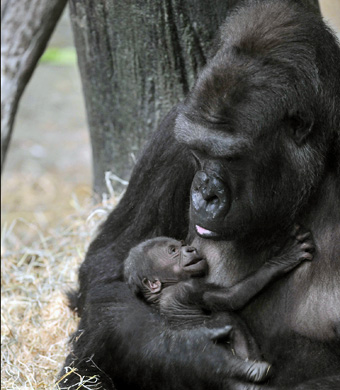 Silverback gorilla papa Kwan, 23, is pretty “hands-off” when it comes to his two new babies, Patty and Nayembi, born in the fall just under one month apart.

Kwan keeps a protective eye over the two different moms and the babies. But, for the most part, he “just kicks back and lets the ladies do the work,” said Lincoln Park Zoo spokeswoman Tiffany Ruddle. “If there’s too much play around mom or baby he’ll step in.”

With so much responsibility falling to the two mothers, 17-year-old Bana and 16-year-old Rollie, the Lincoln Park Zoo staffers made sure their gorillas were prepared to handle their demanding parental duties by providing maternal training before the babies were born.

During maternal training, Bana and Rollie learned to present different parts of their bodies,including their breasts and genitals,to be inspected by staffers.Theexpectant momswere taught correct baby positioning, so that the babieswould go into the correct nursing positions. And they learned to retrieve their babies, so that if the babies are resting somewhere unsuitable the moms can be signaled to go retrieve them.

“Most of these behaviors are behaviors that you have to shape. It’s not like they know ‘mammary’ or ‘breast’ that they’re going to present it immediately,” said MichaelBrown-Palsgrove,zoological manager of theprimate department.

To shape a chest presentation, for example,the trainerswould use a “target stick,” said Palsgrove, who added that they primarily did this to test for milk production. If the baby wasn’t getting enough nutrition, for example, the trainerswould want to see if the mother was producing enough milk, and to do that they would have to manipulate her chest.

The trainer is always in protected contact,Palsgrove said, so there’s always a mesh barrier between the gorilla and the staffer.

Eventually, said Palsgrove, staffers would just move the gorillascloser and closer to the mesh until the chest was pressed up against the mesh. And then they would know that was the behavior we wanted. that their chest should be touching the mesh. And then we would start desensitizing them to us touching it and then manipulating it.

When they go through the process they aren’t yet producing milk. “We just wanted it in our back pocket in case we needed it,” said Palsgrove.

All ofthetraining is optional. The staffers ask for a behavior and the gorilla can choose to do it or not to do it. If they do it though, they get reinforced with food.

“They can decline and not participate, but then they would not get the positive thing which is the food reinforcement, said Palsgrove.

All of the animals learn differently, so they utilize different tools to get desired behaviors. Rollie tends to be quicker, because she has been involved in the training process longer than Bana, said Palsgrove. But, generally, the staff agreed that Rollie learns things much quicker than Bana.

This is apparent in their parenting styles: “Bana, the mother of the older gorilla baby, Patty, is really protective,” said Ruddle. “Rollie is a great mom, but a little less ‘helicopter parentee,’ so she might like let her ride on her head, which she likes to do, which I think is awesome. Or you know, let her ride on the belly or even set her down while she makes her nest. I mean, keep an eye on her but not so on top of her.”

Palsgrove and Ruddle said that, so far, Rollie and Bana are taking excellent care of their babies and that they haven’t had to employ any of the maternal training, but it’s always good to have it in place.

“The mothers are always right there but we’re seeing great milestones,” said Ruddle.