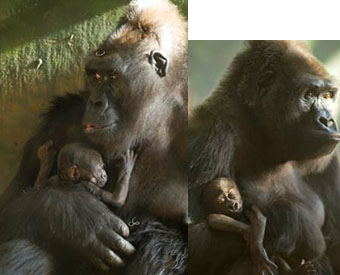 Lincoln Park Zoo today announced the birth of a baby girl western lowland gorilla. The newborn is the first of this critically endangered species to be born at the zoo since 2005.

The baby has yet to be named, but appears to be doing well with mother, Bana, a 16-year-old first-time mom. Dad Kwan, a 22-year-old silverback, has stayed protectively close to mother and baby.

“Bana has taken very well to motherhood,” said curator of primates Maureen Leahy. “She is showing all of the signs of a doting new mom and is appropriately tender toward and watchful over her infant.”

The newborn came into the world on Nov. 16 and joins a troop of seven. The other gorillas are “respectfully curious” about the new arrival, according to Leahy.

Bana came to Lincoln Park Zoo in 2010 from Chicago’s Brookfield Zoo, where she was born in 1995. She is a low-ranking female in the group but has what keepers call a “sisterhood” with fellow female troop members. Bana is particularly bonded with a similar aged adult female named Rollie. Rollie has been within an arm’s length of Bana and the new infant since the birth, and Bana has allowed Rollie to gently touch her baby.

“The baby is acting exactly how we would hope a newborn gorilla would,” said Leahy. “It is gripping tightly to Bana and making great eye contact with her during this crucial bonding time.”

Keepers are watching closely to make sure Bana and her baby continue to do well, as the first few weeks are critical in the survival of newborn gorillas.

Prior to giving birth, all first-time gorilla moms at Lincoln Park Zoo are given special “maternal training,” which includes getting the mother-to-be comfortable with presenting different body parts which allow for staff to get a better view of nursing. This allows for non-invasive health checks for her and her baby. This “operant conditioning” allows keepers to offer medical care for both gorillas in case of any unforeseen problems, without ever having to separate mother and infant. All operant conditioning programs are voluntary for animals; similar training can be seen daily at Regenstein Center for African Apes at 1:30 p.m.