My big, fat ‘F’: A Chicago mom’s lesson in being OK with being different 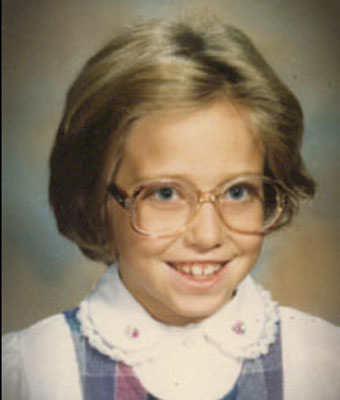 I clutched that small square of paper in my small hand tightly. The big red ‘F’ glared back at me. My eyes were blurry; filling with water then overflowing with tears. I had never failed anything in my whole entire life. For a seven-year-old this was a huge deal and I thought for sure it meant that I was going to be in big trouble, held back or even kicked out of school. I sobbed into my teachers shoulders so confused, still seeing that big red ‘F’.

Turns out that you can’t be kicked out of school or even get in trouble for failing a school issued eye exam. However, I still remember the fear and stress of that day pretty clearly. The actual exam (weeks later) at the eye doctor doesn’t stand out as much as that one big red ‘F’ that changed how I see the world – literally and figuratively. From that moment on I feared I would be known as “four eyes,” “spectacle face” or “nerd.” But possibly even worse, I was scared that I would be seen as uncool just because I wore glasses.

Today I relived all that as I spent the afternoon at the eye doctor with one of my children. A teacher mentioned that he seemed to be having some trouble seeing the board; that he was squinting and needing to come forward. Since I was young when I got my glasses and my husband wears glasses we decided on a check-up for him, just to make sure. My son was not thrilled to be doing this and was adamant that he had no issues seeing. My gut told me otherwise and I went in with the expectation of walking out with glasses.

My mama gut was right and we learned that my son has astigmatism and a need for a very small prescription to see far. According to our doctor the SMART boards that all our classrooms now have is the biggest reason for the eye strain and if he had a regular blackboard there would be a year, maybe two, before we noticed any issues. It has something to do with the lit board and how it’s processed by the eye.

The fact that the glasses will only have to be worn at school when doing board work – not at recess, not for reading, not in sports, not all the time – was no consolation. There were tears, anger, tears and then even more tears. As I hugged him close and tried to talk him through it I could feel the hot tears in my eyes too. Even as I said, “It’s no big deal,” and “You’ll look so cool!” I knew that red hot feeling that was going through him. It was the knowledge of being different, of standing out, of seeing that big red ‘F’ on that small piece of paper.

We talked about it a lot tonight and I gave him permission to be upset. It’s a change, it’s something new and we can be upset about that, sad even. But tomorrow, tomorrow we’re going to move on, embrace the change and make the best of it. It’s a lesson for both of us. I knew that eventually I would have to start reliving moments of my childhood – the good, the bad, the hard and sad – I just thought it would be later on. Parenthood always keeps you on your toes though, so just like I told my son: “Today we will be sad, upset and surprised but tomorrow we will look up and start again. It’s going to be okay.”

Besides he has much cooler choices for glasses than I did when I was young so at least he’ll look good while standing out.

The holiday falls on Feb. 1.
Read more
You

One mom shares on how she really feels about her so-called 'geriatric pregnancy.'
Read more
Travel