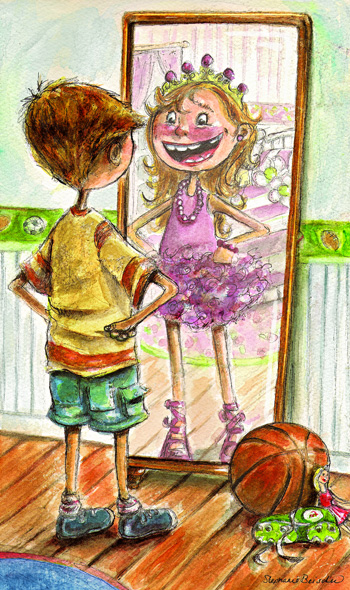 Jamie is your fairly typical schoolgirl. She wears her blonde hair long, likes the color pink and takes a keen interest in fashion. She’s as comfortable on the monkey bars as she is on a kickball field, and she’s happiest doing both in a skirt. She’s energetic and outgoing, and, at 8, looks forward to playdates with her closest friends.

Parents interested in speaking with Jennifer about having
a gender-nonconforming child
may contact Megan Dooley at (708) 613-3368 or
mdooley@wjinc.com

All I Want To Be Is Me, by Phyllis
Rothblatt

Be Who You Are, by Jennifer
Carr

Jamie is also comfortable in her own skin, an accomplishment few people far beyond her years can claim.

It’s not easy, and it’s a continuing process.

Jamie was born a boy.

“There’s this area, this gray area, where you’ve got these gender diverse or gender non-conforming children, meaning they were born with a certain gender yet they’re not typically that gender,” says Jamie’s mother, Jennifer. “The way she says it is, her brain is a boy, her heart is a girl. And she really is both.”

Jamie began to make a nightly habit of fashioning a pair of pajama pants into a makeshift wig. The elastic waistband became a headband, leaving the pant legs to flow like long hair down his back.

After that, Jamie began asking for his mother’s oversized shirts, long enough to belt into dresses on his tiny frame.

In the younger years, it was a steady mix of the masculine and the feminine, with Jamie’s male gender defining his perception by the outside world, while his female expression continued to emerge at every turn.

By kindergarten, Jamie asked that her parents refer to her as “she.” Later that year, she asked to go to school as a girl.

Jamie’s parents did something that many parents of gender non-conforming children struggle with on a daily basis; they embraced it.”Our approach has been to make sure that people know that Jamie is a boy whose expression is a girl, whereas a lot of the families, they just have their kids present as girls,” Jennifer says.

For now, Jamie is still comfortable straddling two genders. “She knows that having boy parts is a part of her, but doesn’t define her,” Jennifer says. “She can say… ‘I’m a boy, and it’s not all of me.’ So when we say to people that she’s a boy, it doesn’t disempower her or invalidate her expression, it’s just a reality.”

Jamie says this about people’s reactions: “On the outside, people assume that I’m a boy. But on the inside, in my heart, I believe I’m a girl. They’re not my body, and they can’t tell me who I am.”

Boy at school, girl at home

Jamie entered kindergarten at a public school in Oak Park as a boy. She wore her girl clothes at home after school, and eventually outside. But it got to the point where she was tearing off her boy clothes the moment she got home after school.

“I felt more comfortable in girls’ clothes,” Jamie says. “I don’t know why. It’s just, girls are pretty, and I like their clothes so much.”

Her true identity eventually became too difficult to suppress.

“Near the end of school, I showed my class,” says Jamie, who wore girl’s clothing to school the last few weeks of kindergarten.

“By then, most of the kids kind of knew,” says the principal at the Oak Park school where Jamie just finished second grade.

The transition came with some bumps along the way.

“She would spend a lot of lunchtimes (at school) crying last year,” Jennifer says.

Older children sometimes antagonized her and called her gay, though she didn’t know what the word meant. But the school always intervened and the incidents of bullying have drastically decreased.

“It’s been a gift,” Jennifer says of the school. “When I talk with the other parents (of gender non-conforming children both locally and across the nation) they can’t believe that she’s in a public school.”

But it can still be lonely at times for Jamie. In a society of rigid gender definitions, she’s continuously trying to live both her physical gender and her gender expression.

“We worked really hard at having her be just sort of unshakable with it, and not take it to heart. And it’s hard. She doesn’t have a spot.”

She wants to play kickball with the boys, but they won’t let her because she’s a girl. She wants to hang out with the girls, but sometimes Jennifer says she can be really hyper and goofy like a boy.

Jamie is vocal about the difficulties she faces, but she’s confident that she made the right decision, to express herself as a girl.

“It was hard, when I started to be a girl, because I got bullied, like right at that moment,” Jamie says. “And at the same moment, I wanted to be a girl.”

Losing their only son

There was a mourning period for Jennifer and Robert, for the son they’d never have. They are the parents of four, but Jamie was their only son.

“There are some things that you have to deal with, and give up,” Robert says. “I actually looked forward to playing baseball with my son. And that’s probably not going to happen.”

For Jennifer and Robert it was an ongoing process. And they’ve grown considerably since Jamie first began to express herself as a female.

“You think it’s just a phase. You think, ‘oh that’s funny, she really likes dresses’,” Jennifer says. “And then after six or seven months, I realized it wasn’t waning at all. In fact, it was intensifying.”

“I was really annoyed with my wife, for buying all this pink stuff,” Robert says. “But then she started researching, and researching… and we started to get that there’s this whole world of gender spectrum.”

He eventually came around.

“You’ve got to house both ways of being for a little while. You’re saying goodbye to the things you thought you were going to experience with your son, and at the same time, welcoming what will be,” Robert says.

A few years from now, new issues will likely arise. The question of a physical transition, for instance. It’s not something the couple discuss with Jamie yet, but there is a hormone regimen that blocks some of the male characteristics that come with puberty. On one hand, it simplifies what might later be a much more complex process. But it’s a life-altering decision for a prepubescent child, because the blockers cause sterility.

Jamie’s parents feel it’s simply too soon to have that conversation. “At 8 years old, how the heck do you know?” says Jennifer.

The couple face complex issues every day in their quest to honor Jamie’s true self, but they said that they’re the ones who have really learned from the experience.

“It’s taught us both to have a whole new level of appreciation and tolerance for other views. Not just gender expression, but anywhere in life,” Robert says.

It’s one of their goals, to educate others on gender non-conformity.

Editor’s note: The names of the child and parents in this story have been changed to protect their privacy.