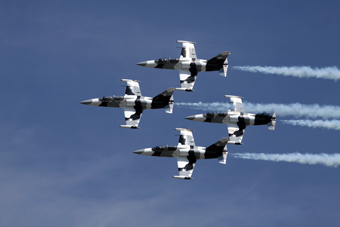 Grab some sunscreen, a few beach towels and your little pilot and head out to Gary, Ind., for the 2011 South Shore Air Show, taking place over the beach at Marquette Park July 15-17.

“The South Shore Air Show is a family-friendly event and is completely free to enjoy,” says Erika Scheeringa, spokesperson for the show. “The air show will not only have high-energy aerial performances, but food vendors, kids’ play areas, interactive displays and of course, the beach.”

In its 12th year, the South Shore Air Show has something to offer everyone. Little ones can visit the Marquette Park playground, as well as the Kids’ Play Zone, which will include a bounce house. Then families can stop by the interactive displays set up by branches of the military. And of course, the skies will be filled with the military and civilian acts participating in this year’s show.

Pilot Bill Stein will fly an Edge 540, which has been painted to look like it changes colors as it flies. An Ann Arbor, Mich., native, Stein says Lake Michigan and Gary’s venue is a beautiful place for an air show.

“I think you’ll find that air shows are just compelling; they are interesting and unusual,” Stein says. “One thing about air shows is there is a lot of passion in it. That shows in what we do. The whole thing is about families and kids and maybe you can inspire kids to grow up and not necessarily become air show pilots but to do what they want to do and become one of the best in the world at what they do. What could be better than that?”

The Heavy Metal Jet Team will also perform in its first year on the North American air show circuit. United Bank Card Inc., which sponsors the team, has dedicated the season to the Make-A-Wish Foundation, which will be bringing kids out to Friday’s show.

Other acts this year include:

Dave Dacy and wingwalker Tony Kazian, who will walk along a Super Stearman biplane.

If you’ve never witnessed an air show at sunset, consider attending the twilight show Friday, July 15, which begins at 6 p.m. Visitors will see all of the weekend’s entertainment along with a firework show. Parking on Friday is only available in the paid parking lot for $20, located near the beach. An optional VIP party is available on Friday for $50 per person, which includes parking, drink tickets and food.

On Saturday, July 16, and Sunday, July 17, the air show will run from noon to 4 p.m. Free parking will be available at Majestic Star Casino and Hotel, with a free shuttle to the beach. Parking at West Beach in Portage is $6 with a free shuttle, but parking here tends to fill up quickly. $20 parking close to the beach is available Saturday and Sunday.

Brought to you by Star Cinema Grill
Read more
Advice