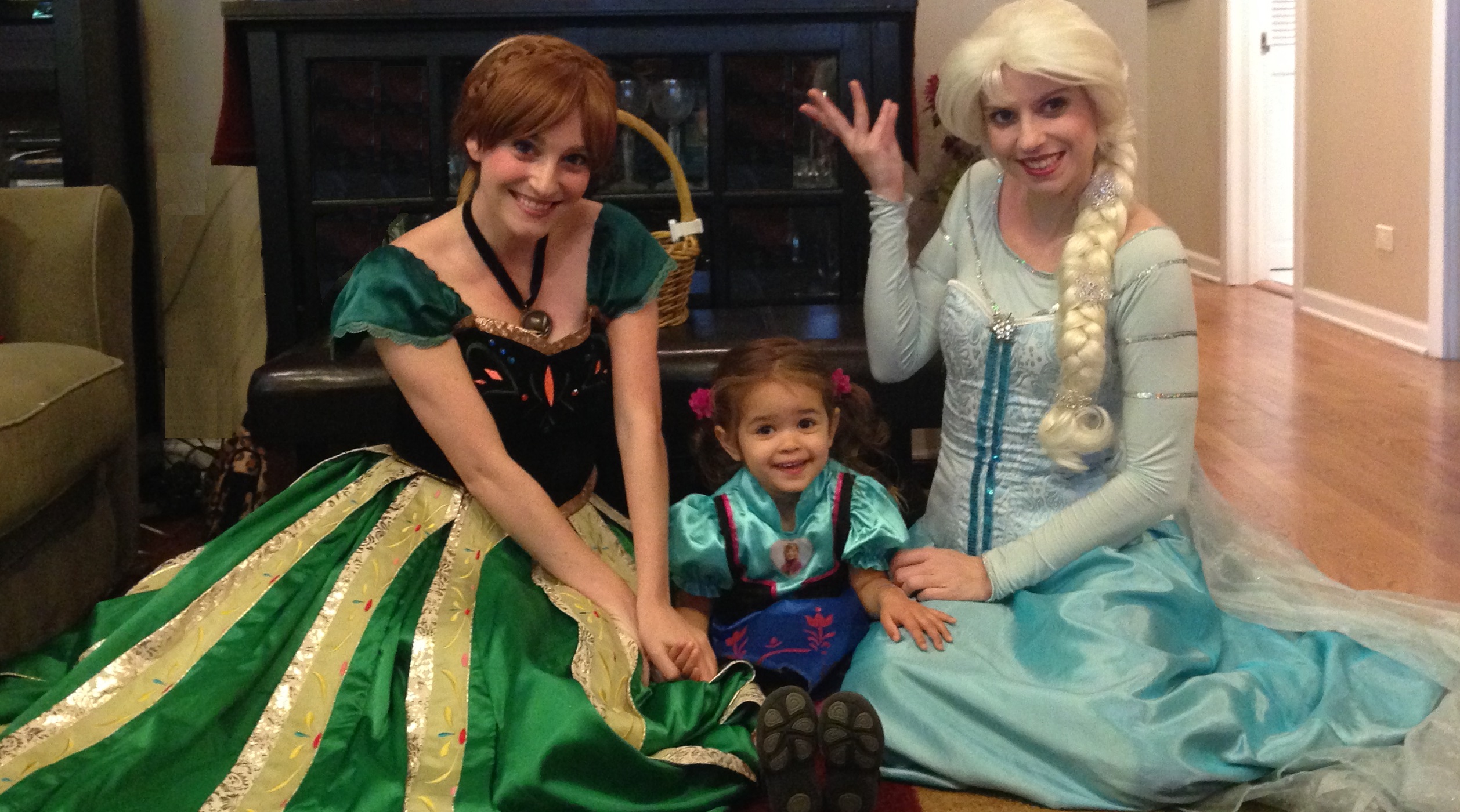 This week’s blog post is by WDP co-host Matt Rocco, who lives in the Edgewater Glen neighborhood  of Chicago with Professor Foster (his “Brown Mom” wife), and their daughter Viva, whose soul is spiraling in frozen fractals all around.

All the feels. I believe that’s what the young people on the interwebs call it when they are overwhelmed by emotion: “Having all the feels.” This weekend I definitely had all the feels, and it was in the middle of my daughter’s 3rd birthday party.

Viva came back from her bout of the insidious EVD-68 virus (as documented in last week’s article), and was given clearance by her doctors to go ahead with her much heralded, greatly anticipated, and pretty much talked about every day since this time last year, 3rd birthday party.

Her party would be, as most little girls’ birthdays likely were this year, themed after Disney’s “Frozen.”  And even though we already have cupboards full of party plates and cups and napkins from her last two birthdays, Mommy headed out to stock up on a whole lot more partyware branded with lovestruck Anna, angry hermit sorceress Elsa, doofy anthropomorphic snowman Olaf, blood-thirsty murderer Prince Hans, and all the other beloved characters.

My wife and I were kids before the “Disney Renaissance,” so you didn’t see this much rabid excitement over Disney movies when we were having birthday parties. No one was jumping over one another to have celebrations themed after “The Great Mouse Detective,” “The Fox and the Hound” or “The Black Cauldron.” (Although “The Black Cauldron,” with its totally age-inappropriate shambling zombie hordes, would’ve made a pretty rad birthday.)

This party was a big deal, and Grandma brought cupcakes in the shape of Anna’s dress – it was Pinterest brought to life in frosting and candles.

The guests arrived, the brats were grilled, gifts were piled into a mountain of material excess by gracious friends we saddled with the dreaded birthday invitation, but the highlight of the party was a visit from two “real life” Princesses provided by A Spoonful of Magic Princess Parties. I don’t know who was more delighted by the all the petticoats and braids that came sweeping into my house, my daughter or the many moms in the room. The Princesses told stories, played games, and sang songs to a rapt full house, and no one seemed to mind that all the bratwurst got cold in the process. (I guess when Elsa of Arendelle is in your house, you can’t expect your food to stay piping hot, you just pray for no snow monsters.)

Here is where I mention that, through some accident of friendships and genetics, there were only two other little girls at the party besides my daughter, and one was a newborn. The many toddler boys, however, were very polite and engaged, and not one of them walked away or shouted, “Boo! Bring out Thor!” or whatever the 2-year-old boy equivalent is of shouting “Freebird” at a folk festival. In attendance, however, were a fair number of voice teachers and actresses, which might be intimidating for a singing Princess, but these two performers were utterly unphased and sounded, well, a good deal better than Adele Dazim at the Oscars.

All of the adults were huddled in a semi-circle, watching the pure joy on the faces of the kids, and Viva in her little Anna gown marveling at real life Anna. The characters lead the kids in a round of “Do You Want to Build a Snowman” as I sat up on the counter top trying to get a good camera angle… and that’s when it hit me: All the feels.

There was my daughter, adorable, innocent, imaginative, cradled in pure joy, surrounded by people who love her and being sung to by magical beings. A tiny, perfect reflection of love of my wife and I, who, for just a short while longer, knows no pain, no want, no finality, no Ebola, no ISIS, no Ferguson, no Adrian Peterson – only cupcakes and Princesses and love. Like the Grinch when his heart grew 40 sizes over Whoville, every feeling I should have felt in well over 35 years that I might have suppressed with irony or cynicism, came welling up, and I feared that, not only was I going to sob like a baby, I might actually explode into rays of warm light (and globules of fatty meats).

I thought about making a break for the back door, but between myself and door were my Dad, my father-in-law, my uncles, my sister-in-law’s police officer boyfriend… basically all the people you don’t want to catch you crying to “Do You Want to Build a Snowman.”

Mopping up my face with Sven the Reindeer napkins, I hoped my sniffles would be drowned out by all the laughing and clapping and Musical Theatre. Based on the whispers in the room afterward, I think I was noticed.

The little boys probably just thought I was sad there was no Thor.

So, the party was a success, and I did not explode into rays of warm light and fat globules. I probably did embarrass myself slightly, but it was worth it for that one perfect moment in time with my little girl.

Hopefully her 4th birthday party will be “Tangled” themed. I don’t really connect with that one, emotionally.

You can also listen at whitedadproblems.com. (Do note that the show has a potty mouth and is definitely for Over 17 Only.) Follow the Dads on Facebook and on Twitter: whitedadprobs.

Brought to you by Envision Unlimited
Read more
Guides