French parenting is all the rage 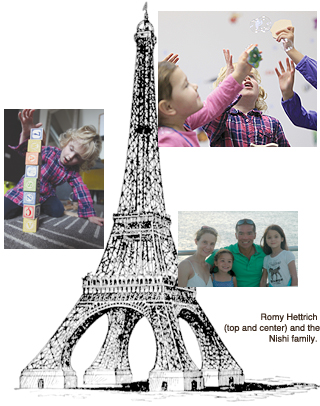 It’s hard being a parent these days.

Apparently, it’s not enough just to feed your kids, get them dressed every day and figure out how to fill the hours between wake up and bed time. Long before your baby is born, you’re expected to decide what type of parent you plan to be. Attachment? Schedule? Disciplinarian? Sling wearing or stroller pushing? Veggies before fruits? Public or private schooling? Just to name a few.

And now, you can thank Pamela Druckerman for adding another parenting quandary to the list: French or American style parenting.

The former Wall Street Journal reporter who grew up in the United States but moved with her British husband to Paris shortly before having three children (a single followed by twin boys), has written Bringing Up Bébé, which compares the vastly different parenting styles between the two countries.

It’s not simply a comparison between the two styles. It’s an all-out war.

In the book, Druckerman applauds French parents for raising such disciplined, orderly, independent children while thumbing her nose at American children, who apparently tend to be picky-eating, control-seeking, attention-craving little buggers.

Druckerman explains that infants in France sleep through the night by the time they’re 8 weeks old, thanks simply to waiting five minutes before attending to the crying babies to see if they’re whimpering because they’re in the middle of a sleep cycle or crying because they’re hungry. Instead of snacking on Cheerios all day, children in France have three solid meals plus one snack daily at set times-and these times are set at infanthood, when the babies are only offered milk four times a day.

And if they do decide to take their children to the playground (a much rarer occurrence there than here), French moms sit off to the side and relax while their children play by themselves. Playing at an American playground can be called many things, but relaxing tends not to be one of them.

It all comes down to discipline and teaching your child independence, and the French seem to be doing a better job of this, according to Druckerman.

In Chicago, where many French parents reside, the book has brought up a lot of issues that hit home.

“I don’t think that I could say there is one set of parents that are superior,” says Alain Weber, head of Lycée Français.

But, he says, they do follow the French traditions at Lycée Français, where a majority of the teachers and parents are French.

That means that every night starting in Grade 1, there is homework-and that homework is expected to be polished, prompt and absent of a parent’s touch.

Lunchtime at Lycée Français is quiet, calm and polite.

“Even the little ones sit at the table and they wait until everybody has been served to start to eat,” Weber says. “That’s something that you learn to respect others. It’s a rule of life.”

And after school, the children are not loaded with music lessons, Mandarin lessons and ballet lessons. Instead, they have time to play at home, independently.

“We cannot prescribe all the time what the child is to do. You learn by playing and playing with other children. If every moment of the day is prescribed by an adult, then where is the child going to learn about the world around him?” Weber asks.

American parenting experts in Chicago also see the value of many of the French parenting tenets.

Janeen Hayward, licensed clinical mental health counselor and president and founder of Swellbeing, a Chicago-based parenting consultancy for issues ranging from sleep to potty training to positive discipline, says that while she doesn’t believe that most 2-month-old babies are ready to sleep through the night, nor that parents always need to sit on the sidelines at the park, she appreciates the French view toward picky eaters.

In the United States, she says, we tend to cater toward children’s food whims and desires, which can lead to narrow food choices.

“They should say, ‘This is what’s for dinner.’ Put out one new food a day. There are a lot of family meals in France, and there’s not a power struggle,” says Hayward, who has a 5-year-old and a 2-year-old. “There are expectations that are known, and they don’t feel like they have to make two lunches and two dinners.”

Hayward tries to instill her favorite parts of French parenting in her American values.

Dona Nishi, a former teacher and Chicago mother of two girls, agrees. While she tends to lean on the side of attachment parenting-Nishi carried her first child everywhere since she only slept when she was being held, she doesn’t approve of the cry-it-out method of sleeping, and she goes out of her way to make sure that preservatives don’t enter her kids’ mouths-even she sees some value in being a French disciplinarian.

“It’s OK to be the adult in the relationship with your children,” Nishi says. “Your kids don’t have to like you, but they do have to love you. This takes a certain amount of maturity and is something that isn’t taught when we pursue our education or careers.”

While many are in awe of how disciplined French children appear to be, not everyone thinks it’s appropriate.

Stephanie Hettrich was born and raised in France by American parents and she moved to the United States for college. She remained here and now lives in the South Loop with her husband and two girls, ages 1 and 3.

When she was living in France, she only played with French children and went to French schools. Her parents loved the French education system, but they didn’t embrace the strict discipline style at home.

“The French system is more about turning kids into little soldiers,” Hettrich says. “There’s no French noun for ‘fun.’ It’s really reflective about how the French society is.”

When she was little, Hettrich’s home became the place where other children wanted to play since they were allowed to do whatever they wanted. Plus, there wasn’t spanking in Hettrich’s home, despite French children commonly being spanked until they were teenagers.

“Children in France are little soldiers, and you’re enforcing an adult life onto your child at a very young age, which is why a lot of French children aren’t very happy,” she says.

But there is one aspect of French parenting that Hettrich loves: Meals.

“I abhor the American notion of snacking all day,” she says.

Instead, Hettrich tries to feed her children three meals plus one snack each day. Dinner is the most important.

“The notion of sitting at a table and eating together as a family is what I value the most about the French way of raising children. It’s almost a quasi-religious act. There’s no TV near the dining room table ever,” she says.

Hettrich managed to take a little French plus a little American and blend them until she found what she believes to be the perfect mishmash. And while she was successful, it’s the constant comparing and judging of other parenting styles that can make parents feel as if nothing they do is good enough for their children.

“I’ve learned that comparing ourselves is one of the reasons we American parents-or more accurately our kids-struggle so much with stress and anxiety,” says Jennifer Mangan, a certified parenting coach in Wheaton. “There is no perfect parent or perfect parenting style, nor will there ever be.”

Natalie Dal Pra -
Your kiddie climbers can get their wiggles out.
Read more
At Home

Help your little one grow into a confident young adult with these fun activities.
Read more