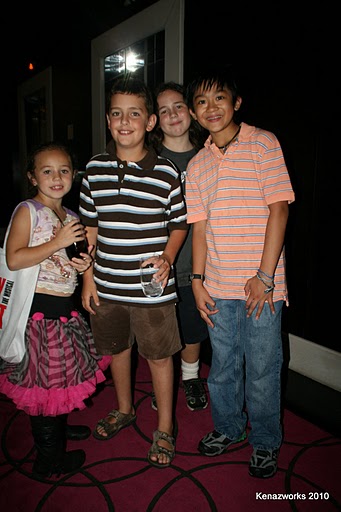 We made the most of our four day Labor Day weekend, and packed it full of fun. Thursday night wechecked out Broadway in Chicago’s production of Billy Elliot at the gorgeous Ford Center For The Performing Arts, Oriental Theatre. I’m not a huge fan of musicals, except the dark, macabre and quirky kind.So, of coursewe all thoroughly enjoyed this one.

The kids loved the music anddance, especially the life sized dancing dresses. Sagezilla and Du-Jay wereespeciallycaptivated, since the cast includes anumber of children, not much older than they are. It was a highlight of our evening to meetBilly,J.P. Viernes, who is only fourteen and did a phenomenal job. He’s been dancing forseven years and trades off with five otherboys toplay thetitle roll.

The story line is a great blue collarsaga,set during the UK Miner’s Strike of 1984-1985. There are timeless threads ofstruggle and love, poverty and passion, strong women and hard working men, withingrained gender and class expectations. It’s a tale of solidarity, community, family and the over arching message of “be yourself” that ultimately trumps all. Billymay have losthis Mother at a young age, but she stillplays an active role in his thoughts, and he takes her words to heart.

That said, this is not a musical for the uptight, conservative parent. If you don’t want your children exposed to swearing miners, cross dressing little boys, heavy class war themes, and men in tutus, then this is not the musical for you. For the rest of you, we highly recommend Billy Elliot. There is a lot of colorful language, but it’s spoken in such aheavy English working class accent, there’s little chance your littles will get in trouble, even if a “for fook sake” pops out of their mouths in school.

We love getting dressed up and going downtown to the theeatah, Dahlink. The setting couldn’t be better. This was Sagezilla and Du-Jay’s first visit to The Oriental Theatre and they adored the ornate ceiling and walls. We had a blast playing I spy games while we waited for the show to start. The kids found a dragon, seahorse elephants, exotic faces, griffins, and other mythical beasts.

The last time I was at The Oriental Theatre solo, I got in the theme of things and completed my outfit with a funky pursedesigned to look justlike an oversized Chinese take out container. It became a fashion accessory and amusing performance art, as box office staff, and three ushers all in turn told me “You can’t bring food in here.” I had to ask them to challenge their knee jerk perceptions andtell mewhen they’d last seen left overs with a zipper!

This time around, we all laughed at many points duringBilly Elliot and were completely charmed by the characters and story line. The biggest laugh of all, though, came after the show. It was pouring rain after the final curtain call, and we made a mad dash down the street to an after party at The Wit Hotel. In the final block before our destination, we were waiting at the light when a cab cut it too close to the flooded curb and caused an impressive “Urban Tsunami” that entirely drenched our friend and other writers standing on the front lines.

We had programs and bags over our heads as makeshift umbrellas, and we were all already soaked to the bones anyway. As we caught each others’ eyes, we all dissolved in fits of laughter. Of course, we try to teach our kids empathy, and discourage themfrom engaging in schadenfreude, orpleasure derived from the misfortunes of others. However, there are some moments life throws at you, when all you can do is laugh.

Winner of ten 2009 Tony Awards incliding BEST MUSICAL, Billy Elliot is a joyous, exciting and feel-good celebration of one boy following his heart and making his dreams come true. Billy Elliot features music by Elton John, and is based on the international smash-hit film.

If you’ve been thinking about checking it out, now is a great time. Kids go free through September 16th, any Tuesday through Thursdaywith purchase of a full priceadult ticket. Use the code KIDSFREE online or in person. Kids tickets are valid for ages14 and under, and are subject to availability.

Brought to you by Smart Love Preschool
Read more