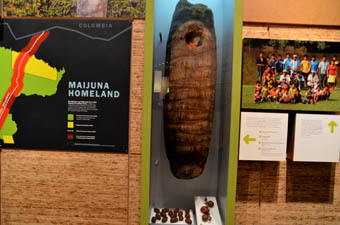 Ever wondered what happens to those birds that crash into the skyscrapers downtown? OK, maybe not, but now that we’ve got your interest in the topic, you might want to visit the Field Museum’s new exhibit and get an answer.

This month Field added a new, permanent exhibit called Restoring Earth that not only includes Chicago’s unfortunate birds, but also some great stories about what the museum’s scientists are doing outside the building.

“We have about 200 scientists here and a lot of visitors don’t know this, so we wanted to tell our own story of the work,” says Anna Huntley, exhibition project manager. “All of the scientists are Field Museum scientists and work goes on right here, but also around the world – in Madagascar, Fiji, and also in Chicago with the prairie restoration.”

The exhibit is best for kids 10 and up and features the high-tech gadgets they love, with lots of touch screens where they can control the content. If you have a tween or teen who’s willing to read or watch a video, there are stories and artifacts from Field scientists in the jungle and in Chicago. There’s an interesting story of scientist Steve Goodman who’s using comic books in Madagascar to teach kids about saving that country’s wildlife.

Plus there’s a whole case of birds that plummeted to their death because of the bright lights of the city skyline. As part of its effort to teach conservation in a way kids can understand, those birds are part of a display about why the lighted skyline is harmful to birds and how turning off the lights can help.

And all this will hopefully get families talking about how they can make a difference for the earth.

“The way we’re talking about conservation is really different,” Huntley says. “Often it gets focused on the negative, but we’re trying to keep it positive. … We’re focusing on inspiration of the planet: Isn’t is beautiful? Isn’t it amazing? We hope that will spark conversations for every family that comes in.”

Pick your way through these awesome spots worth the drive from Chicagoland.
Read more
At-Home Learning