Feeding time is all the time 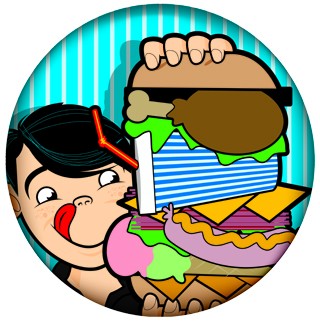 And so here I stand, hip deep in spent pizza boxes, McDonald’s wrappers and Popsicle sticks. My kitchen is piled to the eaves with sauce-splattered pots, greasy pans, dirty dishes and those plastic wrappers from Kraft “cheese” slices. I’m exhausted. I’m worn out. There’s not a scrap of food in the house. I wipe the sweat off my brow, wipe my hand on my apron, and my phone vibrates. It’s the boy, texting me from his lair.

It’s been like this for six weeks. He wakes up, eats everything, then asks me what’s for lunch. I’m trying to keep ahead of him but it’s hard. I hurry back into the kitchen. I make him a couple of sandwiches, some mac& “cheese,” a pickle, a glass of milk. I come into his room and place the bowl gently on the table in front of him so as not to disturb his run of head shots in “Die Zombie Die.”

I break down the mountain of pots in the kitchen, chip dried gravy off the stove and get everything back in order. He brings me the plate.

He eats like a hobbit: breakfast, second breakfast, pre-lunch, lunch, post-lunch, second lunch-I think he eats in the shower.

And he’s not getting fat. Not much. He’s getting bigger. Like I’m zooming in. If his head and feet are any indication of how tall he’s going to be (like 6’1″ isn’t good enough), I should start saving for a new ceiling.

And though most of the food is clearly being used as scaffolding to grow his new giant body, some of it goes through him the old-fashioned way, and it’s as much a problem coming out as it is going in.

I hit the road. I reject my own principles. I drive through Wendy’s. I bring home a heart attack in a box. I have one, too. I feel dirty. I feel like I’ve crossed some kind of line. And I feel like I’ll never eat again. My stomach is distended like I’ve swallowed a bowling ball. I walk in and three of his friends are there.

They’re eating on the couch like a pack of upright hyenas; the crunch of chips is deafening. They all see me and pounce off the couch, snatching the food from my carb stupor weakened grasp.

I’ve been gone 15 minutes. There are six large empty bags of chips, beef jerky wrappers, and an eviscerated Combos bag; one of them has his head inside a sack of Funyuns. I could live a week on the crap they’ve eaten while I was out GETTING FOOD.

They tear open the fast food wrappers and growl.

Christopher Garlington is a Chicago dad and the author of the deathbychildren.com blog.