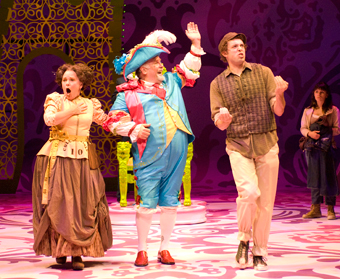 Audiences familiar with Hans Christian Andersen’s fairy tale may wonder how Chicago Shakespeare Theater handles “sensitive” material in its new production. After all, doesn’t the Emperor end up naked at the end of the story? Without giving anything away, I shall just say this production turns the story upside down, adding characters, music and a good deal of humor.

With the addition of a smart and sassy daughter (Sam) for the Emperor, plus a hilarious mother/son combo as the tailors named Swindler, the show’s writers are able to create a familiar parent-child tension that drives the show’s plot. Sam and her father disagree about everything, especially clothes.

The entire cast’s musical talent and comedic timing make for a great show. As the Emperor, Don Forston is completely believable, especially as a slightly bumbling fairy-tale ruler. Likewise, Megan Long as Sam and Alex Goodrich as Kim Swindler bring such youthful energy to their roles that kids in the audience forget these are adults. On the other end of the spectrum, Jonathan Weir exudes hysterical evil vibes as the conniving Lord Vince.

Well-timed physical comedy, bright costumes and fun melodies engage young children, while the snarky lyrics and subtext will keep adults laughing. My kids loved Kim’s obsession with modern technology, such as texting and Web design. They related to his frustration with his mom, who doesn’t quite grasp the power of the Internet.

My sons also loved collecting autographs after the show. After every family

matinee, several actors graciously appear in costume to sign programs and pose for pictures. My 8- and 9-year-olds scrambled for signatures, while my 5-year-old hid behind my legs, eyeing mean Lord Vincent warily, a great compliment to his performance even after the curtain call.