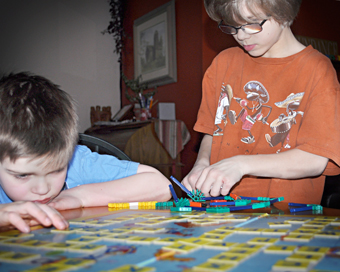 Two unrelated things happened. First, I went out for a little retail therapy. I was feeling a little stressed, so I decided to go shopping. Except for me, who hates to shop, retail therapy almost always happens at a thrift store. Thrift stores thrill me to no end. It’s like ransacking someone’s attic and searching for buried treasure. When I come home from therapeutic thrifting, my husband will say, in mock aggravation, “What’s the damage this time?” I’ll smile coquettishly and hide my purchases behind my back.

Anyway, I was at this thrift store and I found a sign. It was a plain wooden board, and on it were written the words, “Simple Abundance.” Hmm, I thought. What a great concept. Simplicity. But an abundance of it.

Second, one of our sons went through a (cough) behavior decline. That’s saying it nicely. If SuperNanny had walked in during Thursday night’s temper tantrum, she would’ve turned right around and run the other way, throwing her arms protectively over her head and her tightly wound bun.

“When we’re not doing our job as parents right,” my husband always says, “the kids will tell us.” It’s my least favorite of his mantras because it’s so spot on. When our kids are acting out, we don’t have to look very far to find the reason.

We have been distracted this week and we haven’t been paying enough attention to our kids. Our boy told us. Loudly. Angrily. This Mommy yelled. He yelled louder. I pleaded. He sulked. I threatened. He apologized. I forgave. Then it started again.

Somewhere in the middle of all the commotion, those words flew out of my mouth before I could catch them and take them back: “That’s IT! No TV tomorrow!”

Well that was stupid, I immediately told myself. Who am I punishing? Him or me?

But it was too late. Two days of no screen time. I’d said it. And in this house, what Mommy says goes.

In the meantime, the sign, the one from the thrift shop, sat on our kitchen table. I hadn’t found a spot for it yet, so I set it where I could look at it, until it told me where it needs to hang.

But on the last night of the No Screen Decree, our son came to us with Scrabble Junior in his arms.

“Will you play a game with me?”

There we sat, on a Saturday night. Cold outside, but warm and snug in our house, the soft light casting a golden glow in our family room. We were playing a game together. Then the big bin of K’nex came out and I watched my boys-including my husband-laughing and playing and creating. And being.

It dawned on me that if I could, I would carry that big wooden sign around with me all the time. Simple Abundance. What a fabulous concept-to get rid of the abundant noise surrounding us so we really see, really notice, how much we really have. And so much of it can’t be bought or sold or traded.

Celebrate Lunar New Year with these books!
Read more
You

Bathhouses in Chicagoland to Relax and Restore

Stephanie Benavidez -
Prioritize your self care routine with these bathhouses that are designed for rest and relaxation.
Read more
You