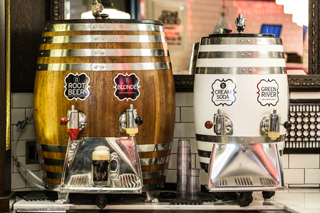 From the moment you walk into the Eleven City Diner, you immediately feel transported to a nostalgic soda fountain-era diner. Between the Willy Wonka-like candy counter and the cheerful music and comfortable booths, Eleven City Diner emits warmth and delicious food.

Restaurateur Brad Rubin spent more than two decades working in fine dining at Chicago hotspots like MK, Sushisamba Rio and Bin 26. But growing up in the suburbs with Jewish delis and diners, he felt something was missing from the Chicago food scene. In 2006, he opened Eleven City Diner in the South Loop.

He opened his second location at the corner of Clark and Belden in Lincoln Park this summer.

“Lincoln Park was a great backdrop for our next store with its stunning tree-lined streets and so many families strolling around,” says Rubin. “It was not about bringing the South Loop Eleven brand to a different neighborhood, but rather my intention is to become part of the fabric of this great Chicago neighborhood.”

The old school diner and Jewish delicatessen hybrid serves up traditional deli favorites such as pastrami, corned beef, lox and matzo ball soup. With house-smoked meats, sides made from scratch and breakfast served all day, the menu choices just keep going and going.

“Above all, we are most certainly a family restaurant with something fun and fulfilling for everyone,” says Rubin. “A single family can have such a wide range of tastes that having such a wide variety of menu choices makes it a bit easier to keep all of the different taste buds happy.”

Having something for everyone includes healthier options like the design-your-own-salad counter and many gluten-free options.

“I believe we have really established a whimsical, engaging environment,” he says.