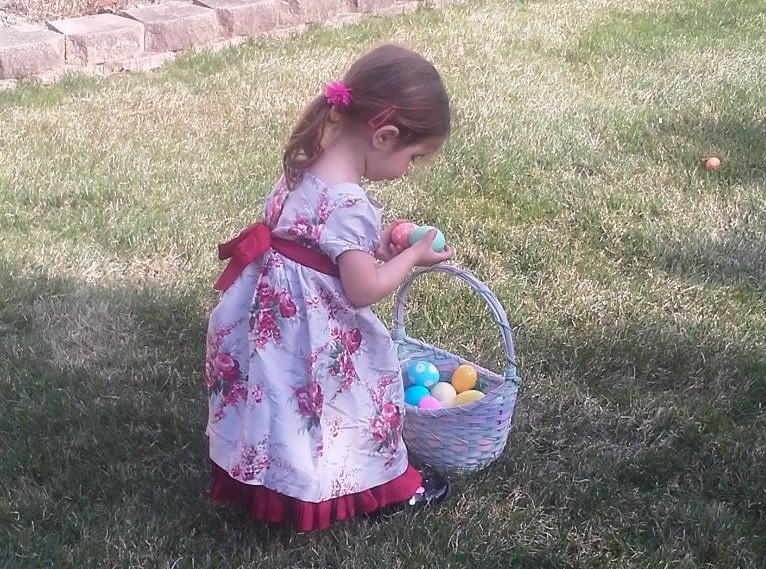 This week’s blog post is by WDP co-host Matt Rocco, who lives in the Edgewater Glen neighborhood  of Chicago with Professor Foster ( his “Brown Mom” wife), and their daughter Viva. Their home now has enough candy to get them to Halloween … of 2015.

This past weekend was Easter, and now that The-Winter-That-Wouldn’t-End has – maybe? – ended, I’m determined to treat my daughter to the greatest spring any toddler has ever known. Our neighborhood was lousy with Easter Egg hunts and Bunny photo ops, and I even threw a couple of egg and candy hunts of my own. Mistakes were made. Lessons were learned. Below I’ve shared my findings with you, to act as a sort of cautionary tale or survival guide for next year.

The toddler kingdom is a wild one, like “Mutual of Omaha” wild – a cruel world where 3-year-olds prey on clumsy 2½-year-olds like lions at a wildebeest watering hold. If you’re going to take your child to an Easter Egg hunt, know that all children bigger than yours are predators, and all children smaller than yours are prey. The Toddler is a Lonely Egg Hunter, in that you can’t really body check a 3-year-old who is bearing down on an egg your 2-year-old has spotted – they must fend for themselves, and it won’t be pretty. There will snatching, there will shoving, and, oh yes, there will be tears. Make sure to enroll your child in a hunt where they are the oldest, largest, or fastest in the bracket, or the tears may be yours.

700 eggs Hoovered up by scrambling families in about 30 seconds time. That’s what went down at the park near me this weekend. Stop to sneeze from the allergens in the grass and you missed your child’s first egg hunt. Bent over to tie your show? Forget it. See you on Mother’s Day. If you’re going to hunt for eggs, get ready for a A Most Dangerous Game – get your toes on the line, start running when they say go (or beforehand, if you were half of the greedy little munchkins I saw), and don’t look back until your child’s basket is full. Fortune favors the bold, he who hesitates is lost, and to the victor goes the Peeps.

The kindly grandma skittering along behind her grandchild? She will trip you to get that child an egg.  The beleaguered nanny checking her texts? She just wants you to let your guard down while she surreptitiously scans for eggs to kick towards her charge. And the innocent older brother or sister of the competition? They will slice your Achilles tendon to get those pastel fun size M&Ms. Keep your toddler moving toward the eggs, stay low, and scoop the prizes right into their basket. Anyone else is the enemy. War is hell.

Six-foot anthropomorphic bunnies with human skin peeking out from the wrists and eyeballs darting behind holes in a mascot head are scary to a grown-up, imagine how it is to a 3-foot-high kid in a diaper! If you thought the mangy Santa with Wild Turkey on his breath at the outlet mall at 10 a.m. on a Wednesday was creepy, take a look at ANY Easter Bunny. Maybe one out of 10 kids at the Bunny photo station we visited could meet “Mr. Hippity Hop” without crying. I didn’t cry, but I haven’t slept in two days with images from “Night of the Lepus” and “Watership Down” forcing me to sit up in a cold sweat. Let your kid squeeze a tiny plush Beatrix Potter doll and leave the Chuck E. Cheese-sized nightmare fuel alone.

All Chocolate And No Ham Makes Jack Something Something

One candy for the basket, one candy in her mouth, one candy for the basket… That was my daughter’s MO while searching for candy and eggs. By 8:30 a.m. she’d eaten more chocolate than she had in her life CUMULATIVELY up until that date. And before breakfast? The Candy Madness set in early, with fits of laughter, running, climbing, throwing, and squealing. By 9 a.m. she was in tough comedown. Flopping on the floor like a sweaty, tremor-wracked Frank Sinatra in “The Man with the Golden Arm,” if you replaced the heroin with “Peanut Butter Reese’s Bunnies.” Bring breakfast into the nursery before you go out and find candy.

Why did I decide Viva should search for actual hard-boiled eggs in addition to plastic eggs full of candy? Does anyone even LIKE hard-boiled eggs? They smell like sulfur, they spoil quickly, and worst off all, they are breakable! My daughter was fascinated when she found “the crack ones,” meaning the hard-boiled eggs instead of the plastic ones, and immediately banged them together. I hope the shells and membranes everywhere don’t attract rats, and I hope we scooped them all up before Grampy finds himself with scrambled egg all over his mower blades.

And now that it’s all over but the diabetes? My house has baskets upon baskets of chocolate, and a 2-year-old who knows darn well that she collected that candy, and has thus earned the right to eat it – for breakfast, lunch, and dinner, to the exclusion of all other foods. I want to sneak some of it out, but I think she kept count. She’ll be getting fillings in baby teeth by May.

So learn from my mistakes, Dear Readers, and next year, tell your kids that the Bunny only brought Tupperware full of baby carrots, and that your new Easter tradition is to sit quietly and read “Max and Ruby” books until relatives show up for brunch.

You can also listen at whitedadproblems.com. (Do note that the show has a potty mouth and is definitely for Over 17 Only.) And follow the Dads on Facebook and on Twitter: whitedadprobs.

After watching the new Disney Pixar movie, try out these activities with your child.
Read more
Health