Four ways to protect finances in a divorce 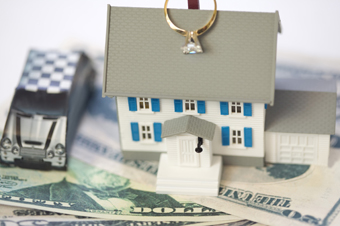 Finances often are at the root of marital discord, and in divorce, they can complicate an already contentious situation. In her practice as a family law attorney in Naperville, Danya Grunyk often sees people let their emotions take over. Here’s what to do instead.

1 Get real with your budget

Take an unflinching look at finances. The custodial parent may end up facing the same household costs, but with a reduced income. Grunyk says sometimes people fight for the house without truly understanding all the associated costs.

“Try not to get in a situation where you’re living paycheck-to-paycheck,” she says. Think about every expense-even the small ones-to ensure you have a realistic picture of your financial life post-divorce.

According to Grunyk, medical insurance generally continues under the same parent’s policy as before the divorce, unless the other parent has better coverage. She counsels her clients to file a Qualified Medical Child Support Order, which allows the custodial parent to discuss medical issues with the insurance company, even when they are not the one paying the premiums.

2 Know where you stand

“People don’t realize it doesn’t matter whose name is on the title of anything,” says Grunyk. “If it was accumulated during the marriage it is marital property. Separate accounts don’t mean anything.” There are exceptions, such as gifts and inheritances, which is why it’s so important to understand the specifics of the particular property you and your spouse own.

Don’t forget about deferred compensation. Many employers provide stock options, pensions or retirement benefits that are earned but not paid until later. If it was earned during the marriage, it is marital property, regardless of when the payment is made. “Be careful if the other party says stock options aren’t worth anything,” says Grunyk.

3 Understand that misbehavior doesn’t count for much

The court’s responsibility is to divide marital assets equitably. Whatever happened in the marriage (or out of it) in most cases will not influence the division of assets. The law treats the cheater the same as the cheated. The Illinois Marriage and Dissolution of Marriage Act specifically notes that fault not be considered in decisions of property distribution. However, if marital misconduct resulted in the destruction of marital assets, such as excessive gambling or irresponsible credit card spending, the court may take that into consideration.

Get a copy of your credit report. If there are mistakes, call the reporting agency to correct them. If everything is in your spouse’s name, start taking steps immediately to build your own credit standing. Apply for a credit card, and if you have the means to make payments, secure a small installment loan to raise a credit score. As for opening a separate account, that can be tricky.

“It’s OK to put money in a separate account for safekeeping,” Grunyk says. “Just make sure you can provide a detailed accounting of how you used that money.”