Parents as “potty mouths”: Watching my language around the kids 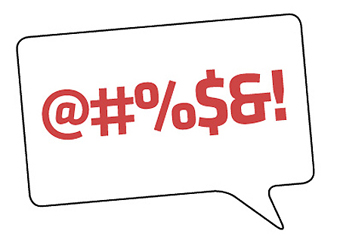 I was headed to dinner with some old college friends who have less than stellar conversational modesty. Since we all have kids now, I just assumed the obscenities would be left at home.In the first few minutes of our greetings and catch-up, the F-Bomb was thrown around, and several other words that left me and my kids uncomfortable.I kept looking at my husband as if to say, “Please say something!”Eventually it did die down, as they sensed my discomfort and David did speak up for the kids’ sake.

Our brand new mayor, Rahm Emanuel, is officially known as a “Potty Mouth.” In Rahm’s family growing up as a child, foul language was not acceptable.

“The Emanuels did not ban swearing in the house, though Marsha says her boys know that she considers cursing to be lowbrow behavior.” (Chicago Tribune)

His father even speculates that the rumors about his son’s language might be exaggerated, according to a Chicago Tribune article andinterview. In my former professional life I had several brief phone encounters with the now honorable Mayor Emanuel. Though he never spoke a foul word directly to me, I can’t vouch for the conversation that went on after I hung up the phone. If indeed he is a Potty Mouth, I wonder how Rahm talks around his kids.

So is this the Victorian era, where ladies and children should be subjected to a different quality of speech coming from the mouths of men?Or is it a free-for-all that now includes womenand children?In my experience, women are generally subjected to just as much foul language in the workplace as men are.

Whenever really bad potty-talking men would “clean-up” their mouths if I was present, somehow it made me feel lesser-almost as though I wasn’t really viewed as an equal.But in front of children now?I think the line must be drawn somewhere, really.In fact, I strongly agree with Rahm’s mother and find cursing in general to be lowbrow behavior.That’s not to say I don’t use a few choice words now and then, but never in front of my kids-which is very difficult since they are the ones prompting me to use the choice words!

How do you talk around your kids?Do you follow two sets of rules for your language, or do you keep it clean/dirty all of the time regardless of who’s in earshot?