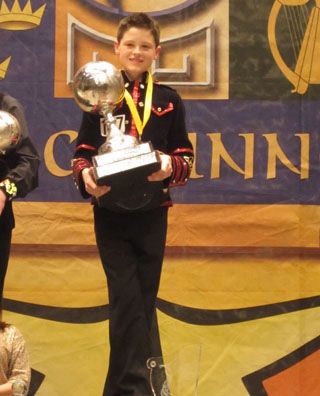 Fans of Nickelodeon’sFigure It Out game show will see someone with strong Chicago ties get slimed Wednesday night.

The game show features kids with crazy and amazing talents. Two-time World Irish Dance Champion Peter Dziak, 15, of Villa Park, says a producer discovered him on YouTube and invited him to be on the show.

During the show, celebrities have to guess the guest’s special talent by asking sometimes silly yes or no questions and risk getting slimed or pelted with weird items themselves.

“It was a lot of fun, dancing on the show was really cool and the game part was really fun, too. I can’t wait to see it,” says Dziak, who is a member of the Trinity Irish Dancers.

Dziak can’t say if he stumped the celebs. (Tune in at 6 p.m. Wednesday to find out.)

About getting slimed: “It was really cold. It got everywhere and for like 10 minutes, I was just sitting in it. It was really gross.”

After taking a shower to get the slime off, he danced to close out the show.

Dziak is no stranger to the camera. He was featured in a short film as part of the Irish dance documentary “Jig” and often dances on the Chicago news shows with fellow Trinity dancers. Despite the two world titles and media attention, Dziak says friends and family-including six brothers and sisters-treat him just like they always have.

“It’s not like I became the president. It’s pretty big to win a world title, but I wouldn’t want people to treat me differently,” he says.

In Irish dance, Dziak is well aware that girls outnumber boys by a huge margin, something he says he doesn’t mind now that he’s older. He says he tries to help the younger boys stick with Irish dancing by showing them they can balance dance and other sports just like he has with soccer, baseball and swimming. His new favorite activity: Paintball, though he admits his mom, Joan, isn’t thrilled with it.

Will there be a party at the Dziak home Wednesday night? Dziak laughs. “I’m sure a couple of people will come over.”