Shake up date night with a Monday night on the town 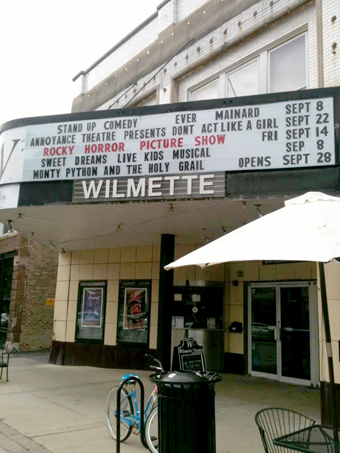 This month Jon and I visited a hidden gem tucked neatly into the North Shore, right in our own backyard. We pass it all the time and figured it was time we dug a little deeper into its 1914 facade.

The Wilmette Theatre, located in the middle of the village I call home, is way more than a quaint little bijou showing both first-run films and hip and artsy indies. It has become a place for stand-up comedy, full-on musicals, children’s theater, lecture series (including a brand-new one all about sex), and even some fabulous burlesque and female impersonation. Oh yes, the ‘burbs have come a long way.

Jon and I decided to partake in the theater’s new Monday Night Music Series, happening the third Monday of each month. Admittedly, Mondays are not the most popular for date night, but think of how easy it will be to find a sitter and how adventurous you’ll feel!

Jon and I attended the first of the new music series performances, all about the decade we met and fell in love: those glorious ’80s.

We got our glasses of wine (served at all of the over-21 events) and settled into the theater’s cozy space to be taken back in time. We were encouraged to cause a little commotion, dance and sing along. It was super fun to hear songs like “Let’s Hear it for the Boys,” “Time of our Lives” and “9 to 5” sung with all-out unabashed glee and a bit of Broadway performance verve. A very unique and silly date night indeed.

This month the Monday Night Music Series takes place on Oct. 15, with a show called “An Evening of Song and Cabaret … with a Twist.” They describe it as “the Andrews Sisters meets The Backstreet Boys with a little Lady Gaga and Madonna thrown in for fun.”

Natalie Dal Pra -
Want to enjoy a mid-morning meal with the whole family at a fun spot in Chicago or the suburbs? Look at this list of places to try out.
Read more