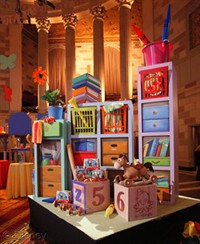 Valentine’s Day saw me flying to New York to have a big important meeting with some of Disney-Pixar’s most popular Toy Story characters: Buzz Lightyear, Woody and Jessie the Cowgirl. Well, at least that’s what my preschooler thought I was doing.

In reality, I was honored and thrilled to be among the press included in Disney’s invitation-only event at the International Toy Fair to get a first look at some of the more than 250 brand new toys to be released this summer through the 2010 holiday season.

The Toy Story-themed setting showed off the company’s creative spirit in all its glory, with photo opportunities with characters, Green Army Men zip-lining from the ceiling, and presentations from John Lasseter, chief creative officer of Walt Disney and Pixar Animation Studios (click here to see my video); Lee Unkrich, director; Darla K. Anderson, producer; and John Ratzenberger (click here to see my video), Disney-Pixar’s “lucky charm” (since he’s been in all their Pixar movies to date), and the voice of Hamm the piggy bank.

The filmmakers also revealed a look at the much-anticipated Toy Story 3 with an all new film trailer (click here to see my video) introducing a plush, strawberry-scented bear character named Lots-O’-Huggin’ Bear, one of 14 new toys featured in Toy Story 3‘s Sunnyside Day Care, and the first plush toy to appear in the film franchis 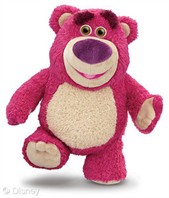 e. The new Toy Story 3 toy line will also include toys inspired by these new characters adding hours of fun as kids play out scenes from the new film.

“I’ve always had a great love and fascination with toys and that’s really where the idea for Toy Story began,” said Lasseter. “When we set out to create Toy Story, I imagined this really amazing group of characters that would entertain kids and families for hours. And that’s also what we set out to do with the toys inspired by the films. Working with some of the best toy companies, we took every single detail into consideration to develop a great toy line that is true to this franchise. Taking a look around the room today, I think we again achieved our vision with Toy Story 3.”

Toy Story is the largest toy licensing event of 2010 and the only film franchise that takes the toy industry by storm with an unprecedented line-up from Disney Consumer Products and more than 20 world-renowned toy companies, including Thinkway Toys, Mattel, The LEGO Group, HASBRO, JAKKS Pacific and Fisher-Price. Boasting $8B in global merchandise sales to date since it was introduced in 1995, the new Toy Story 3 toy line features action figures, dolls, role play, games, play sets, construction sets, vehicles, talking plush and robots that might just come alive when your kiddos are not around. 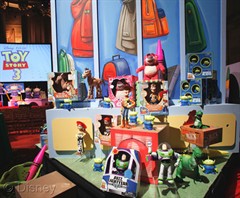 st exciting news was that Lasseter was inducted into the Toy Hall of Fame on February 13, which was celebrated at the event with a touching tribute (click here to see my video) portraying a loving father, innovative creator and film-making visionary. Through such hits as Toy Story and Cars, he has brought toys to life on the big screen in a magical way that has engaged kids and collectors off-screen with film-inspired product for nearly 15 years. Lasseter follows in the footsteps of Walt Disney, who was inducted into the Toy Hall of Fame in 1987.

All of the twitvid’s linked to this post were filmed by me at Disney-Pixar’s Toy Fair event and shared with their express permission.