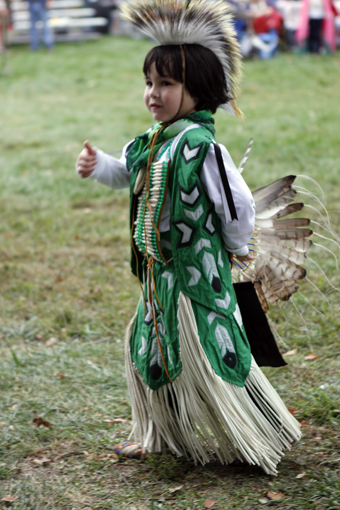 Unearth the traditions of the region’s Native Americans with a weekend full of cultural festivities at the Honor the Eagle Pow Wow May 14-15.

The pow wow, held for more than five years, began as an effort to honor the eagle and celebrate the native history of the area, says Joseph “Standing Bear” Schranz, president and founder of the Midwest SOARRING Foundation, which hosts the pow wow.

The celebration at Matthiessen State Park brings together dancers, drummers and vendors from many states, along with an increasingly popular kids’ craft corner.

Crafts may include bison tooth or feather necklaces, pottery making, native drawings and flintknapping, a how-to on making arrowheads. The goal is help kids learn how to use things in nature in a respectful manner.

“The crafts themselves would appeal to anyone 5 to adult,” says Schranz.

In addition to the drumming, where tribe members group around five to seven drums to play, some social dances allow visitors to participate.

“Besides that, we’ll have a variety of 30 to 40 native vendors who sell jewelry, clothing and skins plus food vendors with Indian tacos, rice soups and (other dishes),” Schranz says.

Eagles, falcons, owls and other birds will be presented by the group SOAR Illinois, a nonprofit organization dedicated to the welfare of native birds-of-prey.

Most parents don’t know that any school can call itself Montessori. We talked with one of just two AMI Recognized Montessori schools in Chicago to learn why this accreditation matters.
Read more
Advice