Death-defying stories from the grandpa archives 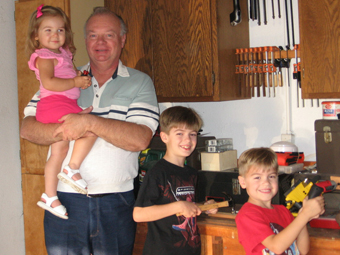 I’ve often noticed how grandparents let their grandkids get away with what I consider murder. I imagine it’s only natural for them to try to diminish the guilt of not allowing their own kids to do fun things by green-lighting dangerous activities for their grandkids. Or maybe it’s a revenge thing with the intention of severely frightening a son or daughter who was a constant pain growing up. That was my grandpa’s reason.

For whatever reason, I relish the day I’ll get the chance to do things with my grandkids that would give my own kids coronaries. This brings me to my father-in-law, who loves his grandkids so much that he can’t say no to activities with risks of disaster so high even an insurance actuary couldn’t calculate them. It’s ironic because he likes me, but it really seems that he’s the one trying to get away with my murder.

I have two boys, age 8 and 6, who, from the time they were old enough to walk, have spent countless hours with Grandpa in his garage. I always steered clear so he could enjoy his time with them. Actually, my thoughts are usually, “Let him deal with them.” Many times I relaxed on the couch reading a paper while occasional loud noises emanating from the garage filled my ears. That was until one day last week when I heard the circular saw fire up, the sound of a Dremel tool whirring and what sounded like a hammer driving nails all happening simultaneously.

Then it dawned on me: My father-in-law does not have three hands.

So I entered the garage at a crazed fatherly pace to find that, luckily, it was my father-in-law who was using the circular saw, shockingly, my 8-year-old was manning the engraver and terrifyingly, my 6-year-old, without any eye protection, was starting and driving nails into a board using a claw hammer. “They’ll be fine,” he said. “A kid learns best how to hammer by smashing his thumb a time or two.”

That night, I went over all the similar situations in the past eight years that I had overlooked. The more I thought about it, the less I slept and the luckier I felt that I had kids who were still breathing.

I remembered the time I came around the back of the house to see a 3-year-old standing at the top of an extension ladder helping Grandpa clean leaves out of the gutter. “He’s got the balance of his Grandpa.” This coming from a guy who fell off the roof of the gazebo he was building twice in a five-minute stretch.

I remembered the dart game with real metal darts between two boys who never ever got through a game of Candy Land without resorting to fisticuffs. “Once they get poked, they won’t do it again.”

Then there was the time Uncle Kevin’s car alarm kept going off because Grandpa decided to let the boys play baseball on the same driveway where it was parked. “Let him say something. I bought it.” And don’t get me started on the rock-throwing contest in that exact location.

No matter how much I want to end the blatantly dangerous goings-on between Grandpa and his grandkids, I realize it would destroy this insane bond he has built with them.

So I have a new strategy: Either I find a father’s support group that is already in session or I start my own. Anybody interested?

Bryan Missey is an IT expert, husband and dad living in Oak Lawn.