A Day in the Neonatal Intensive Care Unit 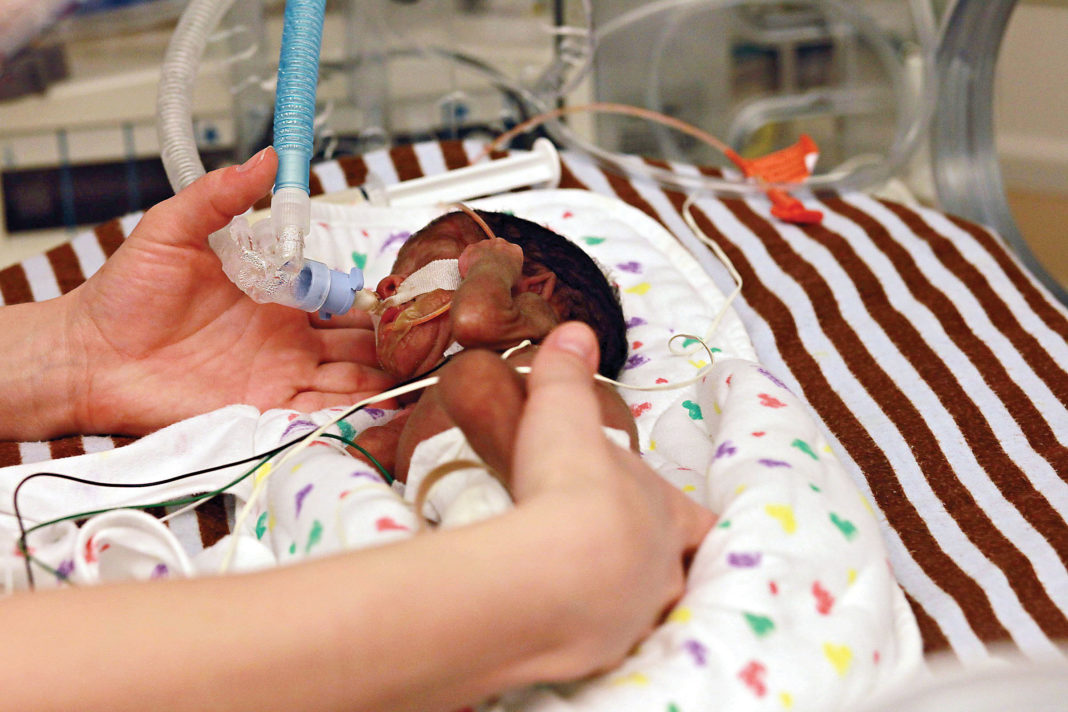 Maeve and Molly Corrigan made tiny grunting sounds from inside their adjacent warmer cribs, amid a cacophony of medical beeps, bells and monitors.

Their mom, Kate Corrigan, sat a few feet away from her twin bundles of joy, born premature on March 13 at just 30 weeks old. In a few minutes she will be allowed precious “kangaroo time,” when she cradles each girl against her chest, skin on skin, like a human pouch of protection and bonding.

“It’s like a drug,” she says softly, in anticipation.

The hardest part for the Forest Park mother, however, wasn’t watching her babies breathe their first breaths and cry their first tears through enclosed isolation beds, or seeing them hooked up to more wires and gadgets than a new entertainment center.

The toughest thing is not being able to pick up her tiny preemie daughters when they cry for her affection.

“It’s a mother’s natural instinct, but …” says Corrigan, her voice trailing off and her eyes drifting to her twin girls.

Here premature and at-risk babies are rescued, cradled and cuddled-some weighing less than a loaf of bread. Parents visit daily for feedings. A few of the babies never make it home to see their siblings.

Here babies born weeks early struggle to stay alive while mothers struggle with feelings of guilt, separation and a haunting lack of emotional bonding. Here the tiniest of lives are nurtured by stand-in mommies, such as registered nurse Kirsten Bizarra, who delicately balance maternal instincts with medical wizardry.

Bizarra joins 120 other NICU nurses to take care of thousands of babies each year inside Northwestern University’s Prentice Women’s Hospital, a million-square-foot, state-of-the-art facility. The NICU can house 83 babies at one time, and many nurses have worked here a quarter century, watching some preemies grow into mothers with babies of their own.

“It’s the most fulfilling job I could ever imagine,” says Bizarra, a six-year veteran who works 12-hour shifts three days a week.

New parents are often scared, confused and intimidated when they first learn their babies have been admitted into NICU. Gone are any dreams of returning home immediately with their new baby in tow, often replaced with nightmarish fears about their child’s future.

“It’s very overwhelming at first, which is why education is everything here,” says Bizarra, who breaks the ice by asking parents for their baby’s name.

It personalizes her nursing care while reminding parents that their child is a person, not only a patient. Bizarra artistically writes the name on a poster above the crib, one of several touches to make parents feel at ease.

“This way, doctors and nurses can refer to each baby by name, not by gender or by medical problem,” she says.

After instructing parents to scrub up to their elbows, she encourages them to begin talking to their baby immediately, even if the child is strapped down with tubes and beepers, or seemingly fast asleep.

“The babies can hear their voice, including the micro preemies, even through a warmer (crib),” Bizarra says.

Parents visit here around the clock, taking turns feeding, burping and changing their newborns. Most also slowly learn to medically treat their babies, first by watching nurses and then by sheer repetition.

“We try to get parents involved in their baby’s care as soon as possible,” Bizarra says. “We are often the nurse to the parents, too.”

However, some choose not to, leery of becoming too emotionally close, or from guilt over what caused their baby’s premature birth. Smoking? High blood pressure? Lack of neonatal health care? Genetics? Bad luck?

Most babies here are preterm births-before 37 weeks gestation-yet every week a mother remains pregnant her baby has better odds of surviving, as millions of new brain cells are created.

NICU nursing “hands-on assessments” of each baby take place every few hours, with the least interruption possible, often timed with a doctor’s visit. A baby’s color, breathing and digestive system are routinely checked, and any needed tests, such as X-rays, can be done through their warmer.

“It’s called cluster care so the baby is not constantly interrupted,” says Bizarra as she adjusts the feeding tube of a preemie.

Nurses also weigh dirty diapers to determine how much “output” is produced and how much progress is made on a daily basis. They also consistently change the positioning of the baby, including the head, because the baby is still developing.

“Even the gel pillows are form fitting,” she explains, while adjusting another preemie.

Each baby’s crib space is adorned with “It’s a girl!” greeting cards, “It’s a boy!” balloons or other personal touches, more for parents than oblivious babies. Parents can even reach into the warmer to touch their baby, but not to rub them or disrupt their sleep.

“We try to create an atmosphere as if the baby is still in the womb, yet through very high-tech means,” Bizarra says.

Medical gowns are no longer needed here for parents, a change from the past. But parents are asked to not bring in jewelry, cell phones, laptops and other items that can carry germs. A swipe card is needed for access into the tight-security pod.

The precious “kangaroo time,” when parents are allowed to cradle their baby against their skin, is designed to acclimate a baby to each parent while also adjusting to their heartbeat.

“Studies show that this is very therapeutic for babies,” Bizarra says. “And research also shows if the mother is in their baby’s presence, it helps with producing breast milk, which is liquid gold here.”

It’s not until babies turn about 34 weeks old that they learn how to suckle, and then they can be weaned from a feeding tube. Baby-step milestones are often celebrated here with colorful posters, such as the “Three Pound Club” for growing preemies or five straight days with no heart-rate drop or weight loss.

Each baby is monitored and each monitor is hooked up to a central monitor in the nurses’ station. The nurses also have a high-tech walkie-talkie around their necks to keep in touch with each other. A “crash cart” sits outside each pod, ready for the worst-case scenario.

“It’s hard to not get attached to each baby, especially the ones who are here for several weeks or months,” Bizarra says while giving a tour of the pod’s “family suite,” often used as a hospice room for babies who never go home.

Here parents spend the last few days, hours and minutes with their dying baby, while nurses put together a personalized kit of finger and foot prints, photos and outfits.

“This is the sad part of my job,” she explains, noting the death of a baby just two weeks earlier. “But there are far more happy outcomes than sad ones. I never dread coming here, even if I’m exhausted.”

Bizarra, whose mother was also an NICU nurse, even dreams of babies in her sleep, and she still keeps in touch with some families of her “NICU graduates.”

“When you work here, this is your life. But I love my job, I really do,” she says, beaming.