Finish the summer at Crashfest 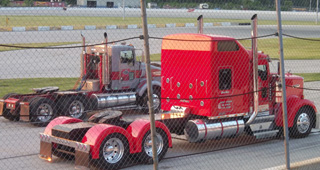 It doesn’t matter whether you’re 8 or 80, there’s something inherently entertaining about watching grown men (and a few women) crash cars, trucks, buses and trailers.

That’s what the folks at Illiana Speedway in Northwest Indiana do twice each summer. The second Crashfest of 2011 is scheduled for Sept. 24.

My family and I have been going at least once a summer for the last few years. It’s a relatively inexpensive evening outing for a family. Admission is $20 for adults (up from the $12 the speedway charges for a regular stock car race night) and $10 for kids. The track sells the standard hot dog and beer concessions, but you’re not there to eat and drink. You’re there to watch the races.

At July’s Crashfest, the highlight of the night was the spectator drag races. It’s just like it sounds: spectators race their personal cars against one another in short contests. The crowd holds its collective breath, waiting to see whether they wreck their really nice cars.

This year, the surprise crowd pleaser was a race between two big-rig semi-trucks. It took them a while to get moving, but once they did, what a race.

That big rig race was a first for us. Most of the night was filled with our regular favorites, the races that use the track’s figure eight to rev up the crowd as the cars and buses speed around the track (usually) narrowing missing one another.

Except, of course, for the trailer race. That race is all about the crashes. Drivers show up pulling a trailer-our favorite was the year a guy showed up pulling a flatbed trailer with a cast iron tub, inflatable doll and recirculating shower. He was pitted against a driver pulling a full-size camper. Crashes are guaranteed because the object of the race is to knock off the other guy’s trailer. It’s always a crowd pleaser.

Brought to you by Pilgrim Lutheran School
Read more
Attractions