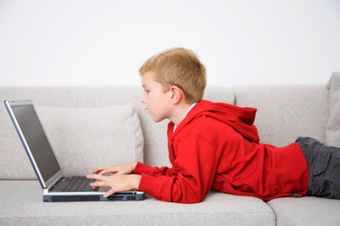 Remember the good old days of the 1990s, when the average American kid wasn’t glued to a screen? The American Academy of Pediatrics does, and the group’s November issue offers new recommendations for kids and media, as well as a healthy touch of nostalgia for a simpler time.

The group’s media policy was last updated in 1999. Since then, kids’ screen time has more than doubled, to about seven and a half hours per day, well above the recommended limit of two hours per day.

What’s your family’s rule on screen time? Comment below

The new guidelines hammer again on the “2-a-day” recommendation and also encourage parents to be good role models themselves. Glued to your Blackberry? Consider this a tsk-tsk from the AAP.

The new guidelines also enlists pediatricians as a line of defense, adding media habits to the list of questions routinely asked at check-ups.

But today’s teens and their gadgets are like water on pavement, seeking out wireless internet, squeezing in texts between (and sometimes during) classes, and filling nearly every moment not spent sleeping with some sort of screen time.

So will a new policy paper from the nation’s top pediatricians group make any difference?

“I think [the recommendations] are appropriate, but very difficult to implement for the average parent, especially when many teens have their own cell phone with quick and easy access to texts and other electronic media,” says Dr. Lisa Thornton, an assistant professor of pediatrics are the University of Chicago’s Comer Children’s Hospital and a health contributor to Chicago Parent.

Thornton recommends keeping any computers your child has access to in a public space, like the family room, rather than behind a potentially closed door.

The Academy also adds the following questions to the list of standard in-office counseling:

“There have been studies done in the past about smoking behaviorsthat suggested that if the doctor opens the door for discussion it can lead tomore positive health behaviors,” says Thornton, an assistant professor of pediatrics at the University of Chicago. “I’m all for the two key questions.”

Checklist: Does your family have healthy media
habits?

Here's how to celebrate Rosh Hashanah and Yom Kippur with your kids.
Read more
School Issues