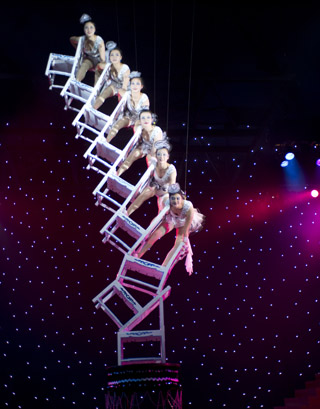 “Wow.” That was what we said from the minute the red curtains opened onto the elaborately decorated stage to the final death-defying act of Cirque Shanghai: Year of the Dragon, now playing at the open air Skyline Stage at Navy Pier.

The show features performers from China doing all of the things we’ve come to expect from Chinese acrobatic entertainers: horrifyingly contorted contortionists, perfectly synchronized gymnasts rolling, flipping and diving across the stage, and speedy jugglers who can’t be believed.

Then there are a few things we haven’t seen before, such as the foot jugglers who play catch with soccer balls while lying on their backs, feet in the air, a feat my 18-year-old son declared: “The most entertaining thing I’ve ever seen.” He changed his mind a few acts later when he saw the women who stack chairs as high as the stage in a perilous off-center formation reminiscent of a Dr. Seuss drawing. The entire structure was held together by the women-who then raise their legs into a handstand.

If you’ve seen Cirque Shanghai in previous years, you may recognize some of the acts as similar to ones you’ve seen before, but none are the same and several have ratcheted it up a notch. This show includes the Globe of Death, but now there are five-five!-neon-lit motorcycles riding in perfect formation at high speeds inside a metal globe.

And there’s a Wheel of Destiny that spins around with one gymnast in each circle, urging it to spin faster and faster while one of them walks on the outside blindfolded or jumping rope. It was that act that gave the audience a collective scare when one acrobat tripped on the jump rope and we all thought he was going to tumble off.

This is one of those rare shows that works for everyone. The 3-year-old in the next row was mesmerized, as was the elderly woman with the walker who sat behind us.

Go on a Wednesday or Saturday and stick around for a few minutes. Cirque Shanghai ends just before the free fireworks show begins. Just hang around the exit on the south side of the Pier and look toward the lake for an explosive cap to an already exciting evening.

Brought to you by Legoland Discovery Center
Read more
Education