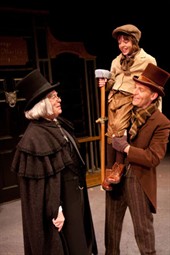 There’s nothing like kicking off the holiday season with snow, carols and a crusty old curmudgeon, particularly when all can be found in Dickens’ classic, A Christmas Carol, now at Drury Lane Theatre in Oak Brook.

Running from November 19- December 21, the popular tale tells the story of Ebenezer Scrooge, the aforementioned curmudgeon and miserly old man who gets a sorely needed reality check from three ghostly spirits (Christmas Past, Christmas Present and Christmas Future), including the ghost of his partner, Jacob Marley, who warns him to mend his selfish ways. Fortunately, Scrooge sees the light, gets with the program, and promises to change.

And, though this condensed version of A Christmas Carol is put on by the Children’s Theatre troupe, there’s nothing dumbed-down about it, meaning that parents and grandparents will enjoy it as much as their little ones, thanks to a talented cast and the comedic stylings of fan-favorite Sharon Sachs and William Dick as a surprisingly endearing Scrooge.

I liked that the sets and props were simple, allowing the audience to focus on the narrators and action at hand. Lively music and bustling actors really made Victorian England come to life, and post-show, kids were able to engage in a casual question-and-answer session with the actors, which means we all learned how the snow machine worked, what it was like to play a ghost, and why Scrooge was so mean (paternal issues).

A Christmas Carol is recommended for ages six-years-old and up, and though the show itself only about an hour, those in attendence who were about four-years-old and under couldn’t sit through the whole performance, or were scared out of their wits by the combination of strobe lights, Jacob Marley and the impressive Grim Reaper (Christmas Future) on stitls.

Make a day of it with an on site buffet-style breakfast or dinner with Santa Claus on select performance dates, including family-friendly favorites like “Tiny Tim’s Tater Tots,” “Dickens Chicken,” “The Christmas Ghost Roast” and more.

Brought to you by Key Autism Services
Read more
Guides