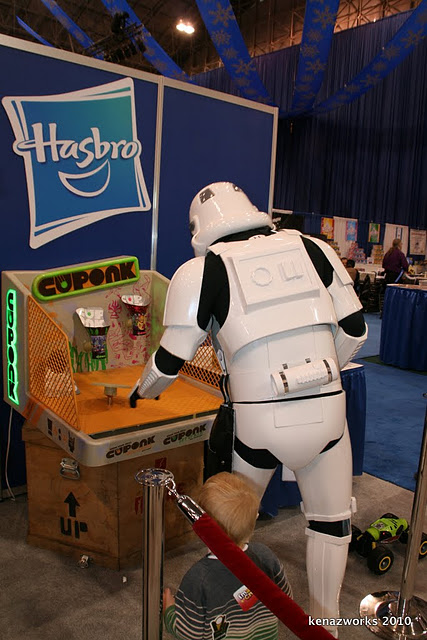 We had a blast at ChiTag, the Chicago Toy and Game Fair, last year and wouldn’t miss it for anything! Check out some of our prior photo filled coverage here. It’s coming around again on November 19 and 20 at Chicago’s Navy Pier.

ChiTag is the largest public toy and game fair in the U.S. It’s open to everyone, not just retailers, and you can preview, play with, and best of all…purchase the hottest new toys and games. Kick-off your holiday shopping early and easy. It’s fun to meet the actual inventors of toys and games on exhibit at the fair and buy right from the source.

There’s lots to do for the whole family, as if playing with the hottest new toys and games isn’t enough. There’s live stage entertainment, free tournaments and contests, a Star Wars Breakfast, giant-sized interactive toys and games, and costumed characters roaming the fair.

Check out the Young Inventor Challenge. Chicago kids 6-18 will exhibit their original toy or game invention and compete for fantastic prizes. Registration closed as of October 31, but it will be fascinating to see what the kids have created. Admission: $10/adult; $5/children; Free for ages 3 and under. For more details check out ChiTag’s main site.

We’ll be there Saturday, for a blogger brunch and panel with game inventors and we’ll have a big review and photo filled feature to follow at ChiILMama.com.

ChiIL Mama is giving away a free FAMILY WEEKEND PASS this Friday at noon. One lucky winner can take their whole family to two days of toy and game bliss!

Enter any time from now through noon Nov. 18 and we’ll announce the final winner at noon on Friday, so you can get to the fest the 19th and 20th. We also have weekly family 4-pack give aways to all of Beat Kitchen’s Concerts for Kids, Schubas Family Series and Families in the Loop, Wonderland. We often have theatre ticket give aways, too.

You can enter multiple times with each documented social media share. So enter like we vote in Chi, IL…early and often. Good luck!