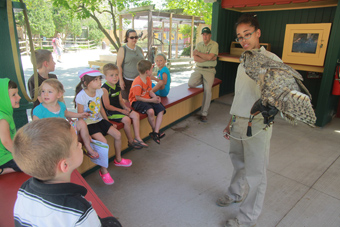 The Chicago Zoological Society on Jan. 1 quietly closed the Children’s Zoo inside Brookfield Zoo, ending the 60-year run of the zoo-within-a-zoo concept.

While the closure is noted on the society’s website, officials never announced the closure of the Children’s Zoo, because future plans for the area have not been finalized.

“Children’s Zoo has closed in preparation for a renovated exhibit that will connect our guests with wildlife and nature in a very personal manner,” said Sondra Katzen, media relations manager for the Chicago Zoological Society in an emailed statement in response to questions by the Landmark. “The new attraction will provide an emotionally rich experience as guests of all ages observe, feed, and touch some never-before-encountered mammals, birds, reptiles, and amphibians.”

The zoo’s strategic plan, adopted in 2004, called for the Children’s Zoo to be expanded, building on the success of the Hamill Family Play Zoo, located immediately to the west. However, it appears that whatever replaces the Children’s Zoo will be something quite different.

Now that the Children’s Zoo is closed, almost the entire southeast quadrant of Brookfield Zoo is available for development. The Chicago Zoological Society closed the old Bear Grottos in 2010 when the animals were relocated to the Great Bear Wilderness exhibit on the west side of the zoo.

The Children’s Zoo occupied about 3.4 acresdirectly south of the Bear Grottos and was reached by crossing a footbridge over a man-made creek. It cost another couple of dollars to enter the Children’s Zoo, which was otherwise shielded from view to zoo visitors.

Once inside, visitors experienced something quite different than what they encountered in the zoo proper. The Children’s Zoo afforded up close and even hands-on encounters with smaller animals and birds.

During warmer months, children would crowd around a demonstration area where handlers would describe various creatures and then walk around the area, allowing audience members to pet the animals and get a closer look.

A big draw to the Children’s Zoo was the farm, complete with a big red barn and outbuildings that housed cows, llamas, chickens, pigs, goats, horses and sheep.

According to Katzen, the Chicago Zoological Society has found new homes for those animals at farms and with individuals. Other animals that could be found in the Children’s Zoo, such as the birds of prey – including a bald eagle – remain part of the zoo’s collection, although they are currently off-exhibit.

The Children’s Zoo opened in August 1953 to a crowd of several thousand people, according to Let the Lions Roar!, the history book published by the society in 1997.

Seed money for the exhibit came from a man named Charles Ward Sudbury, who pledged $35,000 after experiencing the children’s area of the London Zoo.

When it was complete, the Children’s Zoo cost $95,000, and it turned out to be something of a practical and maintenance problem. Because the Children’s Zoo displayed smaller animals, including a baby Kodiak bear, lion cub and elephant, zoo officials were faced with the prospect of having to continually replace them as they grew up.

Let the Lions Roar! also indicates that construction and maintenance costs at the Children’s Zoo were more expensive than initially thought. Eventually, state legislators OK’d an increased to the zoo’s tax levy to account for the costs, and the zoo began charging for admission to the exhibit.

Chicago Parent Staff -
Ready, set, go! Most of these races raise money for charities, too.
Read more
You