Michelle Pollard is convinced her son, Amare, wouldn’t be here if not for Children’s Memorial Hospital. Breathing through a tracheotomy since being born prematurely eight years ago, Amare’s airway was deteriorating. 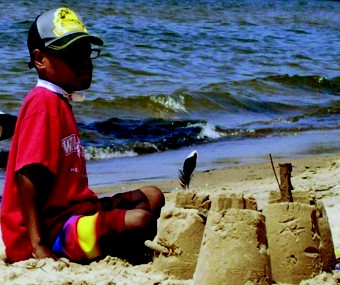 Amare Pollard has been breathing through a tracheotomy since birth.

Amare is one of Children’s recent Laryngotracheal reconstruction patients, a procedure that removes tracheotomies by rebuilding the airway. With a few more surgeries, he should be able to have his tracheotomy removed.

Dr. Lauren Holinger, who performed Amare’s procedure, is one of only a few doctors in the world who perform the reconstructions. For the procedure, Holinger takes cartilage from the rib to create an airway. If all goes smoothly, the tracheotomy tubes can be downsized and eventually removed. In Pollard’s case, the entire process will likely take six months. For others, however, the procedure can be done and the tracheotomy removed the same day. The success rate depends on the child, but Holinger estimates it between 75 and 90 percent.

Children’s performs between eight and 20 of the procedures yearly.

For Amare, however, surgery was the only choice. His airway was deteriorating and constant infections entering through the trach left him resistant to all but three antibiotics. “The last thing you would want is for a child to die of an infection you can’t treat,” says Pollard. “So our hope was get this trach out of him, get this extra portal of entry out, so he’ll be able to breathe on his own.”

Amare wanted the trach out so he would have an easier time fitting in with the other 8-year-old boys at school.

While the Laryngotracheal reconstruction won’t solve Amare’s respiratory issues completely, it will bring him one step closer to a healthy life.

Chicago Parent Staff -
Ready, set, go! Most of these races raise money for charities, too.
Read more
You