How your child can stand up to teasing 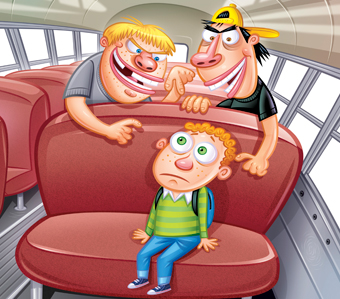 Bullying. It’s a hot topic again as tragedies occur around the country due to cruel harassment and torment. As these stories make headlines, it’s important to discuss how teasing among young children can lead to more extreme bullying when they get older, and how kids can stop teasing before it escalates.

Teach your kids Judy Freedman’s 10 strategies from Easing the
Teasing and help them pick the ones that work best for them.
Continue to review them throughout the year.

Some may think teasing is harmless, but Judy Freedman, author of Easing the Teasing: Helping Your Child Cope with Name-Calling, Ridicule, and Verbal Bullying, says bullying and teasing are on a continuum. If kids learn how to handle teasing early on, it will help prevent bullying in the future.

“I emphasize that teasing is wrong because a lot of times kids don’t think it is,” Freedman says.

Freedman gives presentations to adults and children around Chicago and across the country on the importance of teasing prevention. She has also worked with Chicago’s Imagination Theater to develop a program where kids can interact with performers and learn when teasing becomes hurtful.

But Freedman knows that getting a teaser to stop isn’t easy, so she goes with a different approach.

“Although kids cannot control the actions or words of the teasers, they can learn to control their reactions to the tease,” Freedman says.

In her book, Freedman provides 10 strategies for children who are being teased. They focus on the child’s reaction to the teaser, which helps the child being teased stay calm and diffuses the situation before it escalates.

“In many situations, if kids are empowered with these strategies, the teasing stops,” Freedman says. “Teaching children strategies to deal with teasing is the first step in bullying prevention.”

Mimi Black, a social/developmental psychologist and mother of two, was concerned her son was being teased and came across Easing the Teasing while researching how to handle the situation. Black says it was one of the only books on the subject she couldn’t put down because it was compassionate and logical.

“I have found Judy’s tips to not only be helpful for helping my kids keep their cool in school-because let’s face it, what teasers want is a reaction-but they also help my kids keep their cool with each other,” Black says. “They empower both of my children to have self-respect and respect for their sibling. It has reduced the imbalance of power that might otherwise be in place with one child being older than the other.”

Black was so inspired that she contacted Freedman and they began to work together on an Easing the Teasing companion book aimed at kids. Black has also worked with the Elmhurst School District to teach students Freedman’s tips and strategies.

Mother of three Janey Prodoehl says she has seen a difference in her children after teaching them the strategies.

“My oldest daughter had a great idea to put up a smiley face on the wall and you could talk to the smiley face to get your anger out,” Prodoehl says. “She came up with this all by herself because of the program.”

Freedman encourages parents to practice strategies with their kids to make sure they know how to use them when they are on their own. Freedman herself uses the strategies when she speaks to students.

During one presentation, Freedman was working with a student who had been teased for his big ears. She stood in front of him and said: “You have big ears!” He gave her a big smile and responded, “Yeah, I can hear the ice cream truck a few miles away!”

Prodoehl understands the power of practice, which is why she has laminated the strategies and placed them near the dining room table. Her kids can try them out whenever they want.

“I would say that the more practice you do at home in a nonthreatening environment, the easier it will be for them to use these tips in a more pressured situation,” Prodoehl says.

Along with practicing, parents play an important role in teasing prevention. Freedman reminds parents that kids look to them for guidance and imitate their behavior. She says it’s important to make sure teasing is not allowed in the home and to discuss teasing with your kids.

“Just like you would talk about drug prevention and safety tips, parents need to talk about bullying prevention,” Freedman says. “It may not happen to them, but explain, ‘This is what teasing is, what bullying is.'”

While parents may feel helpless knowing their child is being teased, Freedman hopes these strategies help them. Black believes they do.

“I think Judy’s work is important because parents often don’t know how to best counsel their child until a teasing problem has escalated to a bullying situation,” Black says.

Every child should feel safe at school and wherever they spend their time. Plus, parents should feel good about sending them there.

“It makes me feel better as a parent to give them some tools going forward,” Prodoehl says.

Visit easingtheteasing.com to find more information, including what to do when your child is the teaser.