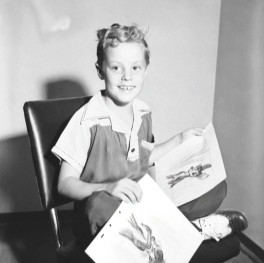 Disney’s new “Second Screen” technology – introduced for the very first time with Bambi – will further transform the at-home movie watching experience by giving viewers the ability to engage with film content and bring it to life at the touch of a button.

And, since Disney is in the business of making memories, it was only fitting to hear from the voice of Bambi himself, Donnie Dunagan, a former child star and the Marines’ youngest ever drill sergeant, who kept his epic role a secret until the late 1970s.

Dunagan was kind enough to sit down and discuss the makings of the classic doe-eyed character, in addition to sharing an insider’s look at Walt Disney Studios in the 1930s.

Walt Disney Studios must have been an amazingly exciting place to experience child. What was it like to work there?

It was great to be part of something that has turned into such a classic. At the time I had no idea how much staying power Bambi would have.

I wanted to do other work with Disney after Bambi, but unfortunately my chances to work on another project were ruptured by Pearl Harbor. Disney wanted to shut down from producing any entertainment during that time.

Did you have a chance to meet Walt Disney while on set?

Yes, not the first time I visited but the second. He was magnificent. He insisted that the background colors in Bambi be done in oils rather than water color – not many films were created in oils. The colors were fantastic and it really shows in the Blu-ray version. He had an eye for excellence.

How did the animators inspire you to “become” Bambi?

I didn’t realize at the time the responsibility that came along with being the voice of Bambi. I know now that it is such a powerful thing. I have the ability to make people happy just by speaking with them. I am very proud to say that I was part of something so much bigger than I am.

Were Bambi’s trademark features – the big, soft eyes – modeled on your own features?

I didn’t know it at the time, but Mr. Disney, from an artistic standpoint, wanted a child with big eyes and big expressions to play the part of Bambi. I didn’t find this out until later on.

What was the toughest scene for you to work on?

The toughest scene to act out was when Bambi’s mother was shot. They told me to call out ‘Mother…Mother…Mother’ and I did.

The film makers made me repeat this several times, and I didn’t get it right until they told me that my mother was in the studio and was in danger. They told me to call out to her and I really thought that she was in danger so it sounded more authentic.

Were you able to attend the premiere?

The filmmakers invited us to attend a special screening in the studio, but my mother was very sick with the flu. They were afraid that I would get everyone else sick so I did not see the film until later on at a screening in Southern California.

The man that drove us was one of the illustrators. When we arrived I realized I was watching the film with people of the community and they were so happy. I was flabbergasted and couldn’t stop thinking how I made up a part of something so powerful. I was so proud, but I would be lying to you if I told you that I knew how long the power of this film would carry on for.

Now that Bambi is being re-released and introduced to an entirely different generation of children, do you think it still has value and a message relevant to today?

Bambi tells the true life cycle – a lot of films don’t do that, they only show a segment of a person’s life. There is nothing wrong with that, but with Bambi, it is the full cycle of childhood to young adult.

The film encompasses so much – comedy, adventure, danger, courage, emotion, laughter and love. I learn something new every time I watch the film. It is such a powerful film and I think that’s why it has been so popular over the years.

Why did you keep mum about your role as you became an adult?

When I was 9½, I made a cognitive decision that I was not going to talk about the films that I had been involved in. When I turned 17, the only thing on my mind was getting a football scholarship, so I honestly never thought about it.

After that, I was drafted into the military and didn’t think about it again until about 1975 when I found out that Disney was re-releasing. I was an operations officer and a commander out in San Diego and I was afraid that they were going to show the film where we were stationed. I could just hear all the boys calling home to their mothers and saying ‘Hey mom, guess who my commanding officer is – Major Bambi’.