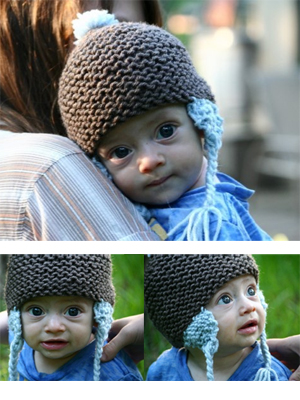 There we were, browsing the online craft site Etsy for a set of matching handmade hats for our web department, we came across this little local guy, Mason. Now, Mason is clearly the cutest baby model weve ever seen, but we knew there had to be more. So we set out to find the cutest kids on Etsy, all modeling products made by Chicago crafters.

Mason sports the baby Oakdale hat made by his aunt, Hallie Borden. After her sister told her it was hard to find hats that covered little kids’ ears, Hallie started making a smaller version of her adult-sized Oakdale hat. The hats are made to order, so shoppers can pick their own custom color combination.

Hallie says she’s been crafting all her life, but only recently started selling online. “I love the idea of people I don’t know wearing things that I made,” she says.

Check out her shop and you’ll also find Mason’s sister, Maya, modeling some of her aunts hats. (Maya’s equally as cute as her brother, but invoking the Golden Rule of Cute Children, the tie always goes to the baby.) And a bit of insider info: Hallie names most of her creations after streets around her East Lakeview home.

Gracie is ready for a day in the leaves with her Fall Tuxedo Shirt Dress made by her mother, Heather. Completing the outfit is a pair of Double Ruffle Denim Pants, also available in Heather’s Etsy shop. Heather says Gracie has gotten used to being on call to model a new product whenever it’s finished, but still takes the occasional chocolate or candy payment.

Heather works out of her home in the western suburbs. She’s been sewing all her life, but got more serious about it after Gracie was born. “I would go shopping, see the cutest things, and I soon realized ‘I can do that.'” she says.

The Fall Tuxedo Shirt Dress sells for $52 and the Double Ruffle Denim Pants sells for $37. 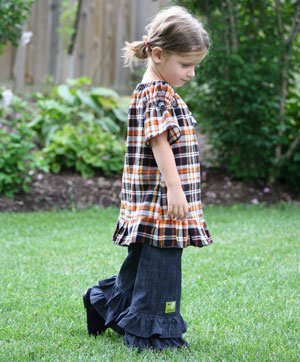 Katie is ready to make peace, not war, in her Peace Twirl Skirt made by her mother, Sandy Stanley. Sandy says she often turns to her daughters Courtney, 5, Katie, 6, and Brooke, 8, for advice or ideas for a new product.

“If I include the girls in the process, they are proud and empowered by what they have helped design,” she says.

Sandy has been sewing since she was 11 and began selling her clothing when she was in high school, making prom dresses for her friends. In 2007 she traded a dress for a friend’s daughter in exchange for some graphic design help and her line, My Own Threads, was born.

The Peace Twirl Skirt sells for $38. Oli is sporting some hometown pride in the Chicago Skyline onesie designed by Elaine Melko. Oli’s mom and Elaine are high-school friends, and Elaine often turns to her friends’ children when she’s looking for a model.

While she does most of her design on a computer, Elaine says she drew the skyline for this shirt by hand.

Elaine, a former art director at the Chicago Tribune, lives in the city with her husband and two sons. She does the silk screening for her shirts in the basement of her bungalow, after the kids are in bed for the night.

“It may not be glamorous to most, but it is a great way for me to be able to spend the days with my children and the nights doing something I love,” she says.

The Chicago Skyline onesie sells for $20. 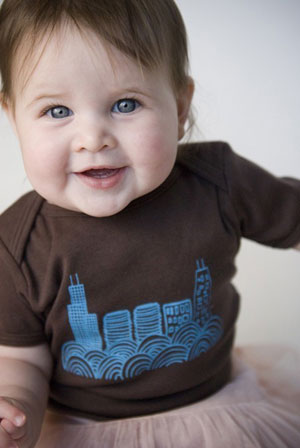 There’s no way to forget how old Jackson was when his picture was taken in the Roboto Monthiversaries onesie made by Tricia McCarthy. The set of 12 onesies (one for each month of that precious first year) feature a colorful robot and the childs current age.

She got the idea after her daughter, Violet, was born in 2008. She says the combination of continuous photo taking, a bit of disorganization and a heavy dose of sleep deprivation made it tricky at times to know how old Violet was in some of the photos. Enter the Monthiversary, a helpful aid to document your childs growth during that first year.

Tricia works out of her Downers Grove home with help from her husband, Kristopher, a graphic designer.

The set of 12 Roboto Monthiversaries onesies sell for $75. She also offers sets of five onesies (with a different design), for $40. 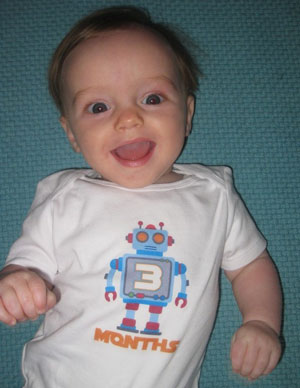 These 8 reading apps for kids are sure to help them get excited about reading this school year and beyond.
Read more
Outdoors