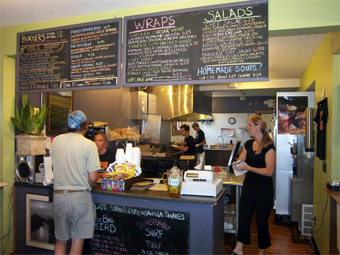 As parents, we all know how difficult it is to get our children to eat enough fruits and vegetables. We barter, bribe and negotiate during snack and dinner time, and hope that by the end of each meal, more greens reach their little tummies than the floor or the garbage can.

5 ways you can help

Whether you live in a food desert or food oasis, you can
make a difference by taking one of these five steps:

But imagine you lived in a place where fresh produce wasn’t sold nearby, and you didn’t even have the green beans, broccoli or cauliflower to barter with. It’s not a far-off idea: 383,954 Chicagoans live in areas where mainstream grocery stores don’t exist, or are farther than a mile away. (“Mainstream” is defined as any store that supports a nutritional diet.)

In these “food deserts,” which are almost exclusively on the city’s south and west sides but exist in the suburbs, too, families without a car are forced to shop where food is closely available: liquor stores, gas stations and fast-food restaurants. These stores typically sell foods that are high in sugar and fat, but carry few, if any, fresh fruits and vegetables.

For families, the problem is significant. Children who grow up with poor nutrition have a hard time paying attention in school, and are less likely to graduate or turn into happy, healthy adults, according to studies by the Mari Gallagher Research& Consulting Group. Plus, families living in food deserts are more likely to suffer from diet-related conditions such as obesity, diabetes and cardiovascular disease.

As of May, the number of children living in Chicago food deserts was enough to fill Whitney M. Young High School to capacity-50 times.

“Parents understand the time factor. You’re rushing here and there, and will make quicker food choices,” says Mari Gallagher, a lead food desert researcher based in Chicago. “When you have to go three or four times out of your neighborhood to find items like apples and strawberries, that’s when your diet suffers.”

Indeed. Darryl Saffore, a pastor at Lawndale Community Church and father of a 17-year-old daughter living in Chicago’s North Lawndale neighborhood, says his diet suffered until two years ago when he decided to change his eating habits, no matter the distance to the grocery store.

His daughter’s diet had suffered, too. Now, after he’s lost 75 pounds from cutting out junk and fast food, he says it still can be a challenge to convince his daughter to eat healthy with him.

“The school food is bad, and she’s around other bad influences (when she’s) with her friends,” Saffore says.

Many causes, many solutions

Food deserts have developed for a variety of reasons, and there’s no single cause or solution. For one, general disinvestment in Chicago’s south and west sides over several decades has led employers and retailers to leave. Grocery stores have followed suit. And while city neighborhoods used to be propped up by several small, independent grocers (whose owners lived in the neighborhoods they served), national chains-and their out-of-state, profit-driven decision-makers-have taken over.

Gallagher points to an even bigger problem: Stores that are allowed to accept food stamps aren’t complying with minimum federal standards for nutrition. Her research shows, for example, that several liquor stores have been listed by the U.S. Department of Agriculture as medium-size grocers or supermarkets.

“We need better enforcement,” says Gallagher, who penned an open letter to the White House in January about the problem.

In a neighborhood like Englewood, she says, there might be 20 stores in the food stamp program, and most are probably out of compliance. “We need to tell them, ‘If you want to stay in this program, comply with these standards.’ Then, the city can offer help with resources. Some (stores) might step up, but the ones who don’t shouldn’t get back in the program.”

Other Chicagoans are taking more grassroots measures to help residents get better access to fresh foods.

Steve Casey, a father of two and resident of Englewood, which is defined as a food desert, recently started a nonprofit that sells fresh produce in underserved neighborhoods. With a couple of grants and several corporate sponsors, he turned a donated Chicago Transit Authority bus into a produce shop on wheels that rolls into Lawndale and Austin two days a week. The Fresh Moves bus, which made its debut trip in May, offers everything from cauliflower to grapes to kale. It accepts credit and debit cards, cash and LINK.

“There’s a video on our website we took of a 13-year-old kid eating an apple for the first time. That captures the change we want to make,” says Casey, who works a full-time job in addition to running the nonprofit. He estimates 70 to 80 percent of Fresh Moves’ customers are parents.

Earlier this year Walgreens expanded 10 of its Chicago-area stores to include a variety of fresh produce, frozen meats and fish, and whole-grain pastas, specifically to address the food desert problem.

Peapod, for its part, has been sponsoring forums where community-based organizations can learn how to facilitate online grocery orders for food desert residents. Many are without computers, according to a Peapod executive.

The good news is these efforts are working: The food desert population decreased by 166,428 people last year, or 30 percent, according to Gallagher’s research. Of the city’s 234 square miles, 55 square miles now encompass food deserts, down from 64 square miles in 2010.

Efforts to further improve these numbers are being led by Mayor Rahm Emanuel, who in June hosted executives from six major grocery chains to discuss specific locations for new stores. The mayor has offered up tax incentives, re-zoning and help cutting through red tape to encourage the stores to set up shop where groceries are scarce.

“We’ve been pleased to see him so proactive,” says Gallagher, who advised Emanuel’s campaign on food deserts when he was a mayoral candidate. “We’re seeing this as a continued priority and, better yet, some progress with reduction.”

Meanwhile, communities like North Lawndale are benefiting from the stepped-up action.

As the Fresh Moves bus stood parked at Ogden and Lawndale avenues on a sunny summer morning, moms, dads and children were deciding between red and green grapes, or whether to buy the watermelon they just taste-tested.

James Jones, a father who lives down the street from where the bus parked, bought produce for his lunch that day-and later, their family dinner.

“I’d rather them eat this than chips,” he says.