When Chicago dads are out of work, moms step up to the plate 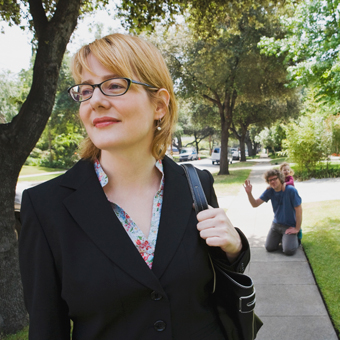 Maritza Rodriguez had worked throughout much of her son’s childhood, but her husband, Jr., was still the primary breadwinner. He worked in construction, Maritza in telecommunications. Her take-home pay was not nearly what Jr. earned, but her salary was a good supplement to his income. Then came the recession and the construction industry ground to a halt. Suddenly Jr. found himself a full-time, stay-at-home dad while Maritza became the family’s primary breadwinner.

How to cope when roles reverse

Switching roles between breadwinner and family caretaker can
shake a family’s foundation when the change comes from an
unexpected event such as job loss. Alice Stuhlmacher, professor of
organizational psychology at DePaul University, offers some tips to
ease the transition.

Try to reframe the situation. Realize that in some ways,
this can be a good thing. “Being a stay-at-home dad can give them
the chance to be the father they want to be,” Stuhlmacher
says.

Remember you’re in this together, with a common goal of
supporting and raising a family. It’s a team effort and these roles
will trade off at different times.

Some women think if they’re not home much, they’re not
good moms. Be honest about what you’re feeling and let go of the
guilt.

Men may be intimidated by the idea of caring for children,
but it’s not an innate talent, Stuhlmacher says. Recognize that the
more you do something, the better you are at it.

Communicate and empathize. Be sensitive to what the other
parent is feeling, recognize the frustrations you both feel and
talk about it when something upsets you.

A recent study found the role-switch the Rodriguez family has undergone is playing out in more homes across the country as the recession hits male-dominated industries. The study showed women’s share of family income jumped to 47 percent in 2009 from 45 percent in 2008, the largest single-year increase in the past 15 years, says Kristin Smith, author of the study, conducted by the Carsey Institute at the University of New Hampshire.

But don’t think that’s a sign of progress for women in the workforce. Unfortunately, just the opposite is true, says Smith.

“This is really an indicator of family financial strain. If you look at the median family income over the recession, it’s gone down,” Smith says. “Poverty rates have gone up. Women are earning less than men. For the most part, the job loss is of the primary earners, so they’re getting by on their secondary earners, which they may not have anticipated.”

For the Rodriguez family, getting by on Maritza’s salary meant downsizing from renting a house to renting an apartment. They sold one of their cars and moved from the suburbs to Chicago, where they could use public transportation. Jr. has taken over the bulk of child care and housework. Maritza leaves for her job at 5:30 a.m., so Jr. wakes up their son Jovannie, gets him ready for school and packs his lunch. He also chaperones field trips. Because he hates sitting around while his wife works, Jr. does pretty much everything around the house with the exception of cooking-he helps with the prep work for evening meals but isn’t ready to tackle cooking himself.

The role reversal is hard on both Maritza and Jr. “It’s tough on him mentally. He feels he should do more, but his hands are tied,” Maritza says. “I feel good that I’m able to provide for my family, but it’s a lot of pressure with everything on me.”

Still, Maritza is lucky. The majority of men who are forced into the role of Mr. Mom due to the recession aren’t helping out any more than they absolutely have to, says Jenny Hoobler, associate professor of management at the University of Illinois at Chicago.

“When a woman is the breadwinner, she does a larger share of home responsibilities than when a man is a breadwinner,” Hoobler says. “A woman is more actively involved. It’s not that they go to work and come home and relax. Women are still on the second shift when they come home.”

Both Hoobler and Smith fear any gains made by dads taking an active role in parenting will be lost once the recession is over because the change was forced on them rather than being something they chose.

“It’s two different things: men making the decision to parent and men being forced into it as no better alternative,” Hoobler says. “My assumption is that when the economy improves, this won’t be something that’s sustainable. Men will go back to work and still be the primary breadwinners. But even if men are forced to stay home and parent because of the recession, maybe it could have the effect of changing societal values. It can be good to see men in more active parenting roles, even if it’s not a choice they’re making.”

Get comfy with these kid-friendly streaming picks!
Read more
Health

Want to be the coolest parent out of all your child’s friends and throw the best birthday party? We’ve got you covered.
Read more